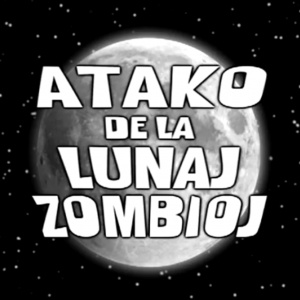 Today I have Christopher R. Mihm with me, the director of Attack of the Moon Zombies! After reading my interview with Dave Rutan, one of his Esperanto translators, he also wanted an interview with me. Now find out why he had to have an Esperanto version of his movie and learn about his fascinating inspirations!

Attack of the Moon Zombies is certainly an interesting title! It reminds me of the title Snakes on a Plane in a way… so, how do zombies get on the moon?

All my movies are 1950s-style new “old,” good “bad” movies, thus the title is both highly descriptive but also era-appropriately over-the-top! In my film, the title creatures aren’t of the “rotting undead” type, instead they’re actually plant monsters. Since back in the 1950s, they knew so little about what to expect in space (since we’d never been there), it allows me to do some truly out-there ideas and plots. In this film, an alien plant is found in a cave on the moon. Once it’s brought into the protected atmosphere of the fictional lunar base featured in the film, it releases spores that instantly kill anyone who come in contact with them. Then, they take over the host body and use it like scaffolding on which to replicate and reanimate the person’s remains.

It’s definitely not meant to be a serious horror movie but it’s not necessarily a parody of those old films. Instead, it’s a serious tribute to those old films. And, because it’s treated so seriously, it becomes more-or-less a comedy! It’s hard to describe but part of the fun of watching those old 1950s B-movies is how serious they treated the material. Even though it’s painfully obvious to us now that the monsters are guys in rubber suits, people back then found them frightening as heck! The difficult line I’m trying to walk with my films is to make them as dead serious (pun intended) and authentic as I can while not being such a slave to authenticity that all the fun is removed!

I noticed that your film is in black and white. Why did you choose this approach?

From a basic perspective, simple authenticity to those old classics. Also, since my movies are filmed on digital video, I never feel like you can get the color to look like true film. So going black and white, I feel, allows my films to look much more “film-ish” than most low-budget indie movies filmed digitally.

Did any of your inspiration come from William Shatner’s appearance in the infamous cult film Incubus, released in 1965?

I would say Incubus definitely influenced including Esperanto in the new film. As a lifelong Star Trek fan, I love all things William Shatner. But even I have a hard time getting through Incubus! If nothing else, I’d love for Attack of the Moon Zombies to outdo it!

At first I thought doing an Esperanto subtitle track would be sufficient. However, as I got further into it, it became much more interesting to me to go that extra mile of having a full Esperanto audio track. After approaching the translation team about making that a reality, it just kind of fell into place! If nothing else, I just really wanted to add my film to that very short list of films that include full Esperanto audio. One of the things that definitely will make my film interesting to Esperanto speakers is that we used real Esperanto speakers as voice talent. Thus, the pronunciation should be correct and of a much higher quality than something like Incubus. It’s a fun, little movie. Honestly, it’s my best to date. I think it could easily be used as a fun teaching tool!

Using real Esperanto speakers is definitely preferred over using plant zombie Esperanto speakers… that’s for sure! How do you plan to distribute the movie? Will you show it in film festivals or theaters? Do you have a DVD release date yet and are you accepting pre-orders?

I self distribute all my films through my website. I have a series of screenings set up throughout the year in various theaters and venues. My movies being so niche, most film festivals just aren’t interested — something I learned the hard and expensive way. That’s not to say there are no film fests out there worth trying to get into, it’s just not something I see as that important (or worth my money). The DVD will be available the day of the premiere (May 25th) and I will soon be taking preorders at the website.

So, we just have to wait about a month, nice! Is there anything else you’d like to share?

If you’re a fan of 1950s B-movies, I promise you’ll love my films! I self-distribute all my stuff so I creatively live-or-die solely through web sales. If you or someone you know might be interested in the type of films I make, please don’t hesitate to check them out at my website!

Thank you very much for all this information. Now I really can’t wait to see moon plant zombies speak Esperanto!

Update: Pre-orders for this DVD are now open at sainteuphoria.com.