Attack of the Moon Zombies in Esperanto? Posted by Chuck Smith on Mar 21, 2011 in Uncategorized 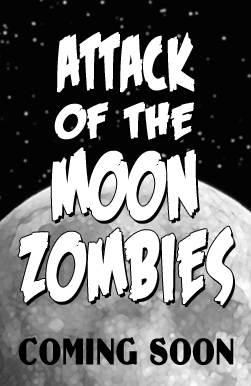 Today I have Dave Rutan with me, one of the Esperanto translators and voice actors of the movie Attack of the Moon Zombies!

How did you first discover this project?

Christopher Mihm, the writer/director contacted me along with probably every American Esperantist he could find on the internet through email. He requested a translation into Esperanto of a slogan for the mission patch which appears on the characters’ uniforms. Apparently Esperanto was suggested to him by one of his associate producers.

Why is this particular film being translated and dubbed into Esperanto? Was it an initiative of the director or from the Esperanto community?

In his original email, Mr. Mihm asked if it would be possible to translate the entire script dialog into Esperanto to be added to the film as subtitle text. He wanted to add something unique to this film since it portrayed a future in the 1970’s from a 1950’s perspective.

How was your experience translating such a long work? Would you recommend it to others if they are offered a similar project?

It wasn’t bad at all. Mar Cardenas commanded the translation team and parceled out the dialog 50 lines at a time. As we finished we were given another 50 lines. I enjoyed translating this movie, although it’s loaded with English idioms which I find difficult to render into Esperanto. You have to boil down what the phrase really means and then try to express it cleverly. I’m glad I wasn’t alone on the project. Given something similar, I’d definitely recommend it to anyone qualified. Translating something like this into Esperanto can help sharpen your skills in the language.

Not sure I can accurately answer that question. I’m hardly at the core of activity of American Esperantists. In any case, George Baker organized the voice actors. Two of the major roles are being voiced by what might be called major players, since they previously acted in the video course Pasporto al la Tuta Mondo. Miko Sloper is voicing Dr. Collins and Jennifer Bondelid is voicing Dr. Hackett. My small part is Robert Ripley.

At least four of the other names I recognize from hanging around Esperanto sites on the web. They’re all Esperanto speakers. One of the reasons we got drafted is that Mr. Mihm fully understood it would take too much time to bring his actors up to speed on pronouncing the language correctly.

Any idea when the Esperanto version of the film will be released?

The Esperanto track will be a part of the initial release on the DVD. The film is debuting before Memorial Day (May 30, 2011). The DVD will likely be available soon after or perhaps at the same time.

Thank you very much for everything and I think we can all look forward to watching zombies speak Esperanto!

Update: If you enjoyed this interview, also be sure to check out my interview with the director!