Leo Sakaguchi (24) is a DJ, Esperanto native speaker and board member of the German Esperanto Youth. He is responsible for Kekso (an Esperanto meeting for those aged 15-25) and is part of the organizing team of the Junulara Esperanto-Semajno (JES, Youth Esperanto Week). His passion is for music and so it makes sense that he feels most comfortable in the Esperanto community standing behind the turntable.

You have a wide range of interests and a lot of energy. Do you ever relax?

Yes, you can’t just work 24 hours behind the turntable every day. Especially on the weekend, during the day, is mostly for relaxing. During the week, I have to go to university. On the weekend, I work in the evenings, which is also a type of relaxing. 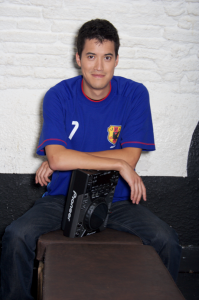 You study on the side as well. What exactly?

How long do you still want to study?

That’s a good question. Another two or three years.

Do you have any kind of plan for after graduation?

I think I’d like to go into the automobile industry and get involved with vehicle safety.

I’ve heard that you also want to study abroad for a semester?

I plan study in Tokyo starting in March 2012 for 6 months to improve my Japanese. I really wanted to go already in the Fall, but due to the current situation there, especially since March 11 (the earthquakes in Japan), I’ve decided to go later.

Since Esperanto is your main language for communicating with your father, you’re a native speaker, you indeed have a special feeling toward languages, don’t you?

Until I was fourteen or fifteen, Esperanto was just the language I happened to speak with my father, no more and no less. I didn’t go to congresses as a kid or anything like that. Naturally, at some point I figured it out: “Oh man, being an Esperanto native speaker is somehow really cool!” That wasn’t quite so obvious to me. For me, it was just my normal life.

If your mother is from Poland and your father comes from Japan, how did you end up in Germany?

After their wedding, my mother lived for a while in Japan. Then my parents decided to either live in Japan or Poland. However, my mother found the Japanese culture to be too special and my father considered it unthinkable to live in Poland, which was then under socialism. Among other reasons, they chose Germany.

Which language is now mostly spoken in your family?

My parents speak Esperanto with each other. My Polish grandmother was so impressed that she learned Esperanto too. In principle, you could say that our family language is Esperanto.

Yes, then when the child is raised on Esperanto, that means that both parents must have a different background. That is also good for the child.

At 14 or 15, it was then clear that Esperanto was something special. Was that also the time when you became active for the German Esperanto Youth?

It was like this: I was with my parents in Frankfurt at their 100-year anniversary celebration and met Felix Zesch, who was then a board member of the German Esperanto Youth. We chatted a bit and then I noticed for the first time that young people speak it too. Soon I was on the way to my first Esperanto meeting and decided to get involved with the organization.

You worked hard to merge the Internacia Seminario (IS) and the Ago-Semajo (AS) together into the German-Polish meeting: Junulara Esperanto-Semajno (JES). What do you think are the advantages of one communal meeting?

I always knew that at the same time as IS, there was also a meeting in Poland. I’m highly linked to the Polish culture and was upset that I couldn’t take part in both meetings at the same time. So, I’ve done what I can to see that these events came together.

What do you think are the opportunities of Esperanto today and in the future?

There won’t be an outbreak like some people hope for. In any case, the Internet especially helps more people to Esperanto, so that more people learn it and that could help a little to make the world better. [laughs]

You were practically born into Esperanto, but not likely into DJing. How did you come across that?

Eight years ago, I was at a party in a nearby city and there was a Russian DJ there performing. I went back and forth, because it was exactly the music I play myself at home, but here it was mixed and a few hundred people were dancing to it. This experience moved me to try it out for myself. It took a couple years, but finally I performed at a similar party. If you want to look at it that way, I guess you could say it fulfilled a small dream of mine.

And what do you do as a DJ… what kind of music?

When I’m normally booked at a club, usually in the direction of electronic, so House, Tech House, Minimal, …, which I have also played at weddings. 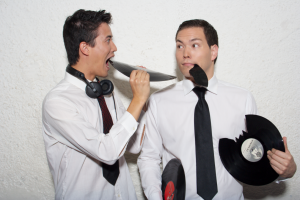 But you don’t always play alone. At JES, you played for the first time with a partner in front of the Esperanto public. Tell us a bit about yourselves!

Yes, his name is Leo too, also half-Pole, half-Japanese and I’ve worked with him now for three years as a DJ-Duo.

Where can we hear your work?

Online, Facebook, Myspace, our own website. There you can find all our tour plans. Soon, we will be playing in Hamburg at the Boulder World Championships.

Besides that, we will be official DJs for events for the German Alps organization and all their climbing events for two whole years, which also means we’ll be playing at the Olympiastadion in Munich.

Do you listen to the same music at home as you play as a DJ?

Good question! At home, I have to dive into the latest music to stay up-to-date, but I can’t listen to just electronic music 24 hours every day. It could also be classical or the radio. So, pretty much anything.

Does your mood have an effect on the music you play? So, when you’re feeling bad, is the music also bad?

The public notices a bit how I’m feeling. But it’s pretty rare that I’m feeling bad, and since the DJ is responsible for the music, then you can play what’s requested to avoid giving the public a bad mood.

Is there any place where you definitely have to play before you die?

My dream is to play in The Womb in Tokyo, one of the most famous clubs in the world. To play there would be the peak of any DJs career.

That was exactly during this time, when I was 15 or 16, as I became active with Esperanto and started DJing. That’s when I learned that there are also DJs and music at large Esperanto youth meetings. That’s where it all started, with DJ Roĝer Borĝes from Brazil. He helped me get started, explaining what you how you have to work the Esperanto crowd. 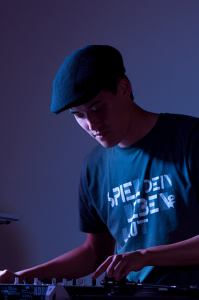 So, that means you have to play differently for an Esperanto group differently than in a regular club?

Yes, definitely. Esperanto speakers are much more demanding than the usual club, so when you’re booked in a club, you play a genre and that’s it. Esperanto speakers listen to everything and then there are people from all over the world and often want to hear a song in their own language. That is already a huge challenge, but that also had quite an impact on me. These skills have also helped me to become more flexible in non-Esperanto environments.

How many Esperanto DJs are there?

Then the competition is quite small. Does that mean that the Esperanto public has to take what they can get?

At Esperanto meetings, the level of culture can vary quite a lot, at one event the bands could be amazing, but at other events totally lame. As for DJs, the skill level can also vary quite a lot, so in that sense, the people do take what they can get.

JES was really the last Esperanto meeting where people could see and hear you. To me, it seemed like that was a real marathon to keep playing music, from early evening to late morning. Was that rough on you?

Yes, New Years is particularly long and you have to prepare yourself well: sleep ahead of time, have the right drinks to keep you going, eat well, but also not drink too much. It’s quite hard on the body, but when the music, and especially the atmosphere are going well, the night goes by so fast that you don’t even notice the sun come up.

As an Esperanto DJ, you always have to keep an eye on the latest releases in Esperanto. Do you have a secret tip for us?

So, I’m really impressed by the work of Jonas Marx alias Jonny M. His style is a fusion of Raggae, Indie, Pop, … I also like his voice, especially in relation to the rhythm. He’s definitely going to rock.