Esperanto: We don’t just make things up Posted by Tomaso on Sep 19, 2018 in Esperanto Language

Esperanto – where have you been all my life?

It’s a common feeling when we find out about Esperanto to be pretty excited. For me, I’d known since fifth grade that Esperanto exists, but I didn’t know it was a thing you could actually learn  – and speak with real people – till much later. For me, it was the year I turned 30. (Wow, that’s old!) When we start learning Esperanto it feels different from learning a national language. In many ways it is different. Thanks to the various methods of word building, the lack of irregular verbs and tenses, and the reduced number of idomatic expressions, many people report more success with Esperanto than with other languages. It’s only natural to want to start putting some of this into practice. There’s kind of a pioneer spirit.

It’s easy to think (whether explicitly or implicitly) that Esperanto is somehow “new”. That we can and should stand in the gap. Invent all sorts of vocabulary, and write all sorts of works of literature as we’re learning, but let’s remember: Esperanto was published in 1887. It hasn’t been sitting on a dusty shelf waiting for us to discover it in 2018. It has over a 130 year history of constant use. Indeed, it’s this history and community of speakers that makes Esperanto worth learning, compared to any of the other possible unused language projects which have been proposed over the years.

When considering how to say something in Esperanto, there are a few factors that come into play. Esperanto does have it’s own internal logic, but Esperanto is not a just a “logical language” (as I often hear said.) It is the living language of an active speech community. There is also the Fundamento to consider (a document of model texts designed to take the place of the centuries of literature that other languages have.) Finally, language is not math, and practicality is often as important as logic. 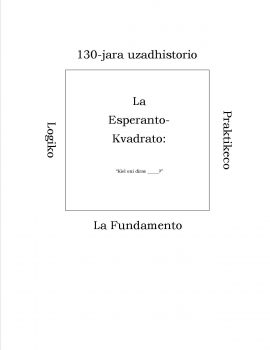 It’s great – essential, actually – to have a community of people to speak with. Part of the process of learning any language is to learn how people learn that language, how things are said, what the established terms for things are.  We don’t just make things up. Having these common expressions means we can have a common understanding. When we go our own way unnecessarily, that breaks that common understanding.

So never create words then?

On the contrary. There are many times when this will be necessary. Sometimes we have an urgent communication need so we do our best to express an idea with the tools that we have. (This is true no matter which language we are learning.) Other times, there really is no established term for something. (This is not as frequent as many new speakers think, however.)  It’s not my goal to explain all the right principles of word formation in Esperanto (but watch Esperanto Variety Show for that topic), do a little checking around, and – most importantly – ask for feedback from experienced speakers. They can help you understand what is and isn’t clear in what you’re trying to say, and may have additional suggestions.