Why is Kio never plural – Esperanto Correlatives Posted by Tomaso on Aug 27, 2018 in Esperanto Language

Esperanto is an “Easy Language”

One thing which we all learn (hopefully) early on in our pursuit of Esperanto is that there’s no such thing as an “easy language.” While Esperanto speakers often report a higher level of success with Esperanto compared to other languages they’ve learned (or tried to learn), Esperanto is not without challenges. Top on that list are the accusative ending (-n), transitivity of verbs, and the “dreaded Table of Correlatives.”

This month’s topic, suggested by Sandio, focuses on one small aspect of the Correlatives. Sandio was a student at NASK this summer who helped me see this question in a new light.

Why is Kio always singular? 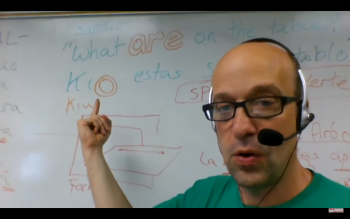 When I teach the correlatives, I usually start with the questions, but it applies equally well to the answers. Why are kio (what), tio (that), io (something), ĉio (everything), and nenio (nothing) always singular? Many of the correlatives are unchanging (kiel, nenies, and iam, for example) but the following question words can take grammatical endings like -j and -n. (Again, this applies to the answers too.)

Note that these happen to be the correlatives that end in vowels. It’s easy enough to see why kie can’t be plural (it’s like an adverb) and if you understand the motion rule explained in Keys to understanding Esperanto prepositions, the same rule applies to adverbs, hence the -n. If you take kie off the list, it might seem surprising that kio, which asks about nouns, can’t be plural like nouns can be. This contrasts with  kiu and kia.

Sandio wanted to know why.

My usual answer is that kio is asking about something unknown. If it’s unknown, how can you know whether it’s plural or singular? Therefore, in Esperanto, we treat it as singular. At this point, a learner might say something like “What if I hold up a bowl of lumpy objects and ask ‘what are these?’ – that certainly sounds plural to me, even if I don’t know what they are.”

At that point, I usually punt. “The reason it can’t be plural is … just ‘cos.”

This wasn’t good enough for Sandio, who pressed the question. I did my best and moved on for the day onto other topics.

Inspiration hit the next day

As I mention briefly in this video, it struck me that we really do the same thing in English. When we don’t say “these” (which is really short for “these things” (tiuj aferoj)), “what” is basically always singular in English. Plural, in English, is reflected in the verb.

If I were to hold up a bowl of lumpy objects and ask about the contents of the bowl, I would ask:

When we specify “these (things)”, we do use a plural verb in English:

… that’s because “these things” is the subject. (These things are what?) It’s the same in Esperanto.

And it applies to “the answers.”

One thing I didn’t mention in the class at NASK is that not only applies equally well to the answers, but might be easier to see if we look at the answers first.

We never say “that are”, or “something are”,  or “everything are” or “nothing are” – so why would we try to make tio, io, ĉio, and nenio plural? The same thing applies to kio.

We learn by teaching

Someone asked me at the end of NASK what I learned while teaching. In the moment I couldn’t think of anything. (While NASK is an awesome experience, in many ways teaching there is just an extension of what I do every day all year long.) I wish I’d thought of this topic – because this certainly counts. Thanks, Sandio, for pressing your question and for suggesting that I write a blog post about it.