If you only remember two things from your basic Esperanto class Posted by Tomaso on Jul 16, 2018 in Esperanto Language, NASK

As I write this, I’m just back from two weeks of teaching at the North American Summer Esperanto Institute (In Esperanto: NASK – short for Nord-Amerika Somera Kursaro). On the last day, I told my students that if they only remember two things from our time together, let it be these two. I thought I would pass the same advice on to you.

Common verb patterns: N with havas; no N with estas 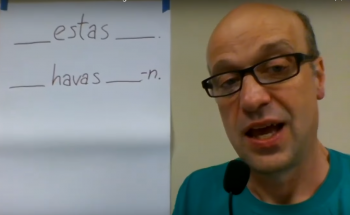 Esperanto is an “easy language” but no language is truly easy. Top on many learner’s lists of troublesome details is the accusative -n ending, used primarily to indicate the direct object – the thing that is “receiving the action” of the verb. When we’re starting out, I like to teach these as verb patterns, as in the image above.

With words like estas (is, are), the pattern is simply to plug the words into the blanks. No -n required.

There is a third pattern for single-actor verbs like kuras (run). You don’t run something. You just run (Mi kuras – I run). Most verbs are like kuras or havas. There aren’t a lot of verbs like estas, but we could include fariĝas (become) in that category. 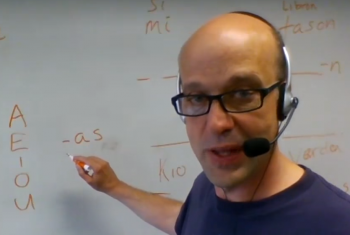 This sounds obvious when you say it, but I find many intermediate speakers who haven’t learned how to put this into practice. We spent a fair amount of time in the beginner class working on this. If you can develop these habits early, you will be ahead of the game in terms of having a good Esperanto accent as well as simply making it easy for people to understand you.

As mentioned in a previous blog post, this is especially important to practice at ends of words since –as and –is tell us when something happens. The important thing is to pronounce these vowels the same way whether they’re in the beginning, middle, or end of a word.

Rather than trying to describe the sounds using text here, please see this video in which I demonstrate the five vowels.

But what did YOU learn, Tomaso?

For me personally, teaching at NASK was a great experience. On the last day, a student from the advance class said that he’d heard that people learn a lot by teaching and he wanted to know what I’d learned. I began to answer in terms of what I’d learned about teaching methods, class dynamics, some things I might do differently next time … but he clarified. “What did you learn about Esperanto?”. Although this was my first experience teaching Esperanto to such a large class (15 people), and my first experience teaching on a daily basis, I have been teaching Esperanto for a long time – 20 years for several hours per week. I learned a lot about teaching an in-person class, but what did I learn about Esperanto?

Eventually I thought of something. I learned that loĝio not only means “box seat”, but it can also mean Masonic lodge. Dear Esperanto learners. If you forget one thing from your basic Esperanto class, let it be that.

The online Esperanto newsletter Libera Folio has written an article about this blog:

For information about NASK, watch nask.esperanto-usa.org which is where announcements about 2019 and future years will be posted.