Improving your Esperanto pronunciation – vowels Posted by Tomaso on Jun 12, 2017 in Esperanto Language

How many vowels are there, really?

When we (English speakers) learn about vowels in school, we learn that there are five vowels – A E I O U (and sometimes Y). In fact, depending on the dialect, English has 15-20 vowel sounds. This can make learning English pronunciation difficult to learn without a native teacher. Fortunately for Esperanto learners, there really are just five vowels and five vowel sounds in Esperanto. This makes it much easier to learn the correct pronunciation on your own. 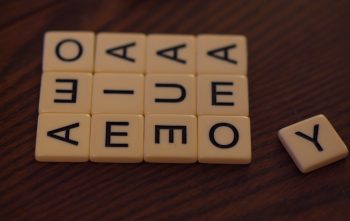 Image by kumsval on flikr

Not as easy as it sounds

The five vowel sounds in Esperanto are often described as follows:

This sounds simple. Why is it then when so many learners contact me for lessons via Skype (or other video tool), they have a good command of the grammar and vocabulary of Esperanto, yet make so many mistakes with vowels? This is such a common problem among English speaking learners, it would pay to focus on the question from the beginning.

One problem is that we’re sometimes led astray by similar words in English and Esperanto. Ofte might look like “often” and mean about the same thing, but it’s not pronounced “awfte”. Make sure that when you say ofte, that it starts out with a nice round O sound like the O in “hope”. Similarly, with havas. The word might look like “have” and mean the same thing, but havas is not pronounced “have-ahs”

The AEIOU song at about 6 minutes into this video has models of how the vowels should sound.

Once you’ve worked on this list as it is, you can do it again pronouncing all vowels as A, then all vowels as E, and so on. While it’s true that feres, hovos, minkis, grindi, and ravana are not real Esperanto words, it’s still good practice. Make sure that with each pass, you’re pronouncing each vowel the same way the whole way through. It shouldn’t be necessary to move your mouth except to make the consonant sounds.