Esperanto fun with Etymology Posted by Tomaso on May 8, 2017 in Uncategorized

Etymology is the study of word origins. Looking at where words come from can help us learn Esperanto, and learning Esperanto can help us understand where words come from. By special request, we’re going to be looking at some word origins. This will help you pick up some Esperanto vocabulary. It will also help you see how Esperanto is connected to English, as well as to other languages, and how you can use this knowledge to impress your friends. (Of course “subterranean” means sub la tero!)

Do any of the words in this sign remind you of words you know in English or other languages? 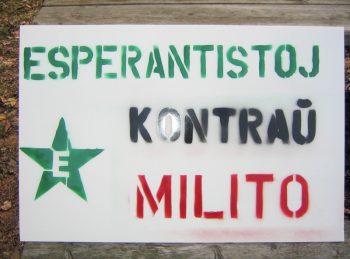 Image by Steven Brewer on Flikr.com

If you have learned another language before starting Esperanto, much of Esperanto’s vocabulary will look familiar. Bezoni (to need) looks like French besoin. Ŝranko (cupboard/closet) very clearly comes from German der Schrank. As you learn, you’ll find no end of connections like this. This is one way in which learning one language helps you learn a second.

The connection of some Esperanto words to English is obvious and doesn’t need to be pointed out. Birdo, boato, and danci are pretty easy for English speakers to guess or learn. Other words aren’t as obvious, but once you see the connection, it’s hard to forget

In the photo above, we see the word “Esperantistoj” – which clearly means “Esperantists.” Kontraŭ (against) sounds like “contra dance” where the dancers stand opposite each other, or “contrary”. Milito (war) sounds like military.

In a discussion, someone pointed this last detail out with regard to the sentence below. I pointed out that every word in the example sentence has its origin outside of Esperanto.

The word helikoptero (helicopter) literally means “spiral wing.” We can think of the double helix as a kind of spiral, and this is related to heliko (snail.) The –ptero part of the word refers to the wing (flugilo in Esperanto) and shows up in words like fenikoptero (flamingo), koleoptero (beetle) – both winged animals – and more amusingly in pterodaktilo – an ancient reptile which flew with its “finger wing.” (“Dactylos/δακτυλος” means finger in Greek.) In Esperanto daktilo means “date” – a fruit which is said to look like a finger.

From your foot to your shorts and on the plate

The Esperanto word kalkano means heel. It’s related to the Latin word for boot (calceus). In a world where people wore togas, really tall boots (or stockings) were like pants. Eventually it lost the connection with the feet and left us with another Esperanto word kalsono or kalsoneto which can refer to swim trunks or underpants. This Latin word took a detour on the way and can be found on our dinner plates as well. Who doesn’t love a yummy calzone from the pizza shop? This is a stuffed pant leg.

What do you think?

What words are you having trouble learning. Can we find out where that word came from? Are there any Esperanto etymologies that you find especially interesting?