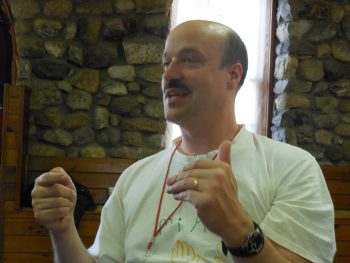 Saluton. Mia nomo estas Tomaso. Hi, I’m Tomaso, and I’m taking over  the Transparent Language Esperanto blog. I want you to be the best Esperanto speaker you can be, and that’s what this blog is going to be about. Each month, we’re going to have new posts to help you understand the important basics of vocabulary, grammar, and pronunciation. This information will be useful whether you’re brand new to Esperanto, or whether you’ve been learning for a while and are looking to advance to an intermediate level or beyond.

Even advanced speakers will find new information here. I’ve been speaking and teaching Esperanto for 20 years, but even now I learn little tidbits. I’ve been keeping a list of things that I have learned over the past year as questions from many new learners have pushed me in directions that I have not explored before. This information will be included in the months to come. I know Esperanto was designed to be simple, but this doesn’t mean that you still can’t learn something new. Come follow along here with me, and learn these details from the beginning.

I am an Esperantist: an Esperanto enthusiast and Esperanto speaker. I am also an Esperanto teacher (and English/ESOL teacher) who has been teaching Esperanto online since 1998. I grew up in the eastern United States near the southern shore of Lake Ontario. I’ve always been interested in languages, and I completed a minor in German before I met my wife. The two of us started learning Esperanto shortly after we were married because we wanted something fun we could do together. We thought we’d try it for a few months. Little did we know at the time the adventures Esperanto had in store for us.

After one year, we took our first trip via the Pasporta Servo, a hospitality network for Esperanto speakers. We stayed with new friends (i.e. people we had not met yet) in Belgium, Germany, and the Netherlands. We spoke Esperanto the whole time. Many of our hosts spoke little or no English. We got to see a side of Europe that had been closed to us till then, and Esperanto helped us make friendships, several of which have lasted to this day.

Kiel vi fariĝis spertulo? // How did you become an expert speaker?

Shortly before the turn of the new millennium, my wife and I had the “nutty” idea to use Esperanto as our home language; to speak Esperanto with our children when they came along. By this time, I was already teaching Esperanto online, and we were involved with organizing local and regional events where Esperanto speakers could come together. I served on the board of the Esperanto League for North America (now Esperanto-USA), and the two of us took part in the World Esperanto Congress in Berlin in 1999.

It was the decision  to use Esperanto as a family language that really changed our relationship with Esperanto. We knew that we had to take our learning seriously, and it also gave us the opportunity to practice on a daily basis — pushing us into new territory where we had to learn the vocabulary and turns of phrase for all sorts of situations.

Yes, we took it seriously, but we had a lot of fun doing it. Esperanto has taken us off the beaten path, and it has given us the opportunity to perform music and do skits – both online and at Esperanto events. We’ve seen a lot of people learn over the years – and become fluent themselves. We can talk a bit more about all this in the months to come.

Thanks for reading, and until next time. // Dankon por legi, kaj ĝis la venonta fojo.