Kick start these Esperanto projects Posted by Chuck Smith on Nov 3, 2016 in Uncategorized

Today Chuck Smith is joining us again as a guest blogger to let you know about two great Kickstarter app projects, which are related to Esperanto: Amikumu and Space Polyglot. Amikumu will be a way to find Esperanto speakers nearby, but that’s very simplistic, because it will actually be a way to find speakers of any of the world’s 7,000+ languages (including 100+ sign languages) near you. Space Polyglot is an innovative way of learning a language through a game using the Suggestopedia method to keep those words and phrases in your head. With all that being said, I’ll pass the word over to Chuck now.

Imagine you’re at a fair in a foreign city and have some time to spare. You’re thinking, it would be great to find other Esperanto speakers nearby, but unless they’re wearing an Esperanto t-shirt, you won’t have a chance. But soon, you’ll be able to pull out your phone and immediately see how far away the nearest Esperanto speakers are from you. Maybe there’s one a hundred feet away! Even if the next speaker is a town away, you’ll be able to connect with that person. 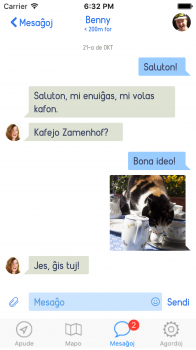 Message and meet up

This is the essence of Amikumu. I had the idea back in July watching people around me play Pokémon GO and I thought it would be cool if you could find other Esperanto speakers around you. I contacted the famous Esperanto YouTuber Evildea and he had the same idea, so we decided to join forces! We launched a Kickstarter to finance the app and we’ve already raised over 17,000€: double our original goal!

Since we’ve raised over our base goal, we’re wizzed pass the stretch goals for enhanced marketing, events and local groups. If we raise 20,000€, we’ll also add interests to the system, so you can find more people like you. In the coming days, we will be announcing new stretch goals, so stay tuned to see what’s coming. In any case, if you want to be part of the language revolution, back Amikumu on Kickstarter and we look forward to seeing you in our app, which will launch for Esperanto speakers in March 2017 and for the general language learning public in July 2017. 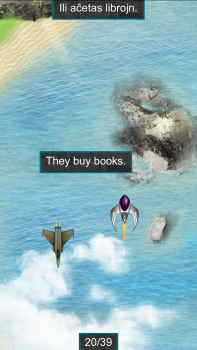 I met the Space Polyglot guys at the Polyglot Gathering this year and was instantly intrigued with their concept. A few months later, we launched the Amikumu campaign and they launched the Space Polyglot campaign a couple days later, noticed our campaign and contacted me. Since they noticed the popularity of Esperanto and the helpfulness of the community, they quickly decided to support Esperanto and made a demo, which you can try now!

As for the project itself, Space Polyglot is a fun and effective language learning game, which takes the principles of the Suggestopedia teaching method and applies them to a game on your phone. In the Learn mode, you learn the vocabulary and then in the Challenge mode, you have to choose the right translated phrase. The entire game you are just listening to classical music, navigating your spaceship and are not making any efforts to memorize words! I used this for Russian and was shocked how long the phrases stayed in my head, even in a foreign alphabet!

So, please back Space Polyglot on Kickstarter and add another weapon to your arsenal to learn another language!