Je – The Esperanto Wildcard Preposition Posted by Tomaso on Dec 11, 2017 in Esperanto Language

Continuing our series on Esperanto prepositions, this month we’re going to take a closer look at the preposition je. This is often described as a “wildcard”, but it’s not always clear to new learners exactly what is meant by this. One thing for sure is that it cannot “take the place of any preposition” as is often supposed. 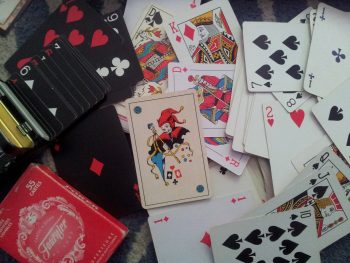 Probably the best place to start our discussion about je and what it means is the original description of it in the 14th rule of Esperanto Grammar.

Every preposition has a definite and permanent meaning, but if we have to use a preposition and the direct meaning doesn’t tell us what preposition we should take, then we use the preposition je, which has no independent meaning. Instead of je the accusative without a preposition may be used.

As you will recall from October’s blog post, a preposition shows a relationship between words. In the national languages, this relationship can vary a lot with context. These must be memorized in certain expressions. In English we say interested in, working on, swear to, yearn for – and we even cry over spilled milk, but we’re not really in, on, to, for, or over anything. All these ideas express the topic of our action. (That is, the topic of our interest, work, oath, yearning, or crying.)

So in Esperanto, where each preposition has a “definite and permanent meaning”, all these could be expressed with the same preposition – in this case pri. (Pri shows the topic and is often glossed as “about.”)

To avoid problems like this (which complicate the national languages), Esperanto tries to stick with the fixed meanings as much as possible. Note that “fixed meaning” doesn’t mean “literal.” If something happens inside of a certain time period, we can still say metaphorically that it happened en tiu tago (on that day – literally in that day.) What we mean is that we try to avoid using just any old preposition without justification. The trouble is that there are some expressions that don’t quite fit. It’s that situation that je was invented for.

For example, if we catch someone “by the hand”, which preposition would we use? We’re not “on” their hand, or for their hand, or in their hand. When I’ve asked this question of my students, someone will sugest per (by means of), but that means we’re using our hand to catch them. This is a situation where we can use je.

For the most part, you’ll only use je in a few set expressions. In addition to je la mano above, here are some examples.

To express when something happens.

To express belief “in” something.

To propose a toast.

To swear “on” something.

The key to using je correctly is not using it when you don’t have to. Save it for when you need it – just like a real wild card. Not every situation has a clear answer, and in come cases usage is a little flexible (see plena je / plena de above.) Try not to make it too complicated, and like all aspects of language learning, it gets easier with time.