Saluton from Gdansk, Poland, where this year’s Junulara Esperanto-Semajno (Esperanto Youth Week) is taking place. I have to say, the biggest critique I could say is that it’s only 5 days long, instead of the usual 7… but man, what a great congress! Here we have 170 people gathering from 30 countries to celebrate the New Year. In the DAY # style inspired by Attack of the Moon Zombies, I’ll share my experience with you.

Landing at the airport in Gdansk, we took out some zloty (Polish money) from cash machines and made our way to the bus. The directions said not to take one route, because then you’d have to pay attention to which direction the bus was going, so we decided to go it “safe” by taking the bus to the train station. A half hour, we arrived. Oh wait, it’s the wrong direction. Grrrr, so an hour back in the other direction we go…

When we arrived, food was waiting for us and it was quite enjoyable indeed, except for my friends who were surprised that the cooks believed the yogurt salad dressing was vegan. However, they quickly replaced it with the salad for meat-eaters, which amusingly enough, was actually vegan! After dinner, the ludejo [game place] filled up upstairs with people playing various board and card games, so I enjoyed the atmosphere there before heading to bed. 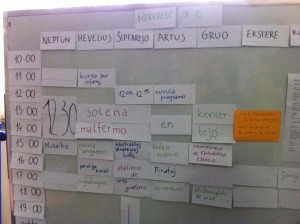 So, looking at the schedule, I see that there’s the opening ceremony, followed by talks on Abstract Board Games, The Pirate Party and Lifehacking. Since my lecture wasn’t prepared, I had to skip the opening ceremonies to work on it, but from what I heard it was “boring as usual,” so I don’t really feel like I missed out. At the same time as the abstract board games talk, I have to admit that I was impressed to see a lecture about the new 24-hour Esperanto radio station, Muzaiko there. In fact, during the whole meeting, they had a booth where you could talk to the team about their project.

Being the board game fan I am, I went to the Abstract Strategy Games lecture [PDF] where we were taught Hex and Lines of Action, both great games. It was a nice touch that he gave everyone a small piece of paper with pens to try out Hex with other participants around the room. Afterwards, I learned that there is now a new Esperanto wiki about games! Then, I quickly rushed to my lecture, surprised to find a room full of people wanting to hear about The Pirate Party. The projector and loudspeakers I had requested were not there, but the organizers quickly found them and brought them to me. Anyway, I’ll post more about that next month here on this blog.

The Lifehacking workshop was really great with everyone sharing about ways to improve their life in the following areas: productivity, motivation, happiness, mind and body and money. Judith promised me a guest post about that, so you can look forward to that soon as well! Then there was dinner and concerts by Asorti (a Lithuanian folk band) and Gijom (a French singer-songwriter with a piano), but they weren’t really my style, so I just hung out with other non-concert goers that night. The nice that about these large Esperanto meetings is that there’s always something interesting going on, but even if you feel like taking a break from the program, there’s always interesting people to chat with from all around the world! 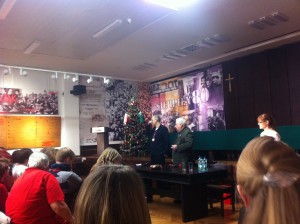 This morning, we had a rare opportunity. We had a meeting with the former president of Poland, Lech Wałęsa (interpreted from Polish by Irek Bobrzak)! He he co-founded Solidarity (Solidarność), the first independent trade union in Soviet countries and won a Nobel Peace Prize. We were a bit afraid of a monologue, but it was mostly a question and answer session, which he prefaced by saying that he’s most interested in tackling the hard questions. The questions ranged from democracy, copyright reform, the Occupy movement, Russian protesters, etc. There were also questions about the role communism played in Poland. It’s quite nice that Esperanto sometimes gives you access to such interesting people!

After that was the aligatorejo, which is a funny event where people aren’t allowed to speak their native language nor Esperanto! That means, you might find a French guy speaking Spanish with a Japanese guy who then replies in German. It’s fun for everyone to practice their languages, which making it clear why Esperanto is a better solution for international communication. After that, I screened Attack of the Moon Zombies, a 50’s style black-and-white horror movie, dubbed into Esperanto. Afterwards, I encountered a group folk dancing, blocking the hallway, so I took an secret underground passage in the school to leave the building. 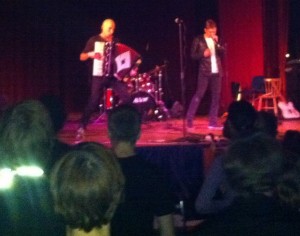 After dinner, we enjoyed a great concert by Inicialoj DC of the famed Berlino sen vi followed by Kimo and Danĝera. Inicialoj DC concerts are always worth seeing, as he presents his inspired electronic music to interesting video clips playing in the background, which match the style of the current song. Kimo donning his accordion, started his concert with his new stuff and then surprised us all by inviting beatboxing Bugge Bang on stage to join him. Then after a short song, they joined forces in what I never expected to see before in my life: a duo of beatboxing with an accordion, interesting!

If you ever get a chance to attend one of these European Esperanto meetings, definitely give it a shot. It’s a great way to experience culture from all over the world as well as to get to know people from other countries. Rather than attending that Understanding Other Cultures workshop offered in your local business school, maybe it would be worth taking a quick trip to Europe to interact with others firsthand and see more of what the world has to offer, in a unique environment!

Have you ever been to a European youth event? What was your experience like? Do you have any advice you’d like to share for others attending for the first time? Please share in the comments!