Language Festival with Esperanto beer! Posted by Chuck Smith on Feb 23, 2011 in Events

Have you heard of a language festival before? If you’ve never heard of that, think of what that could mean. 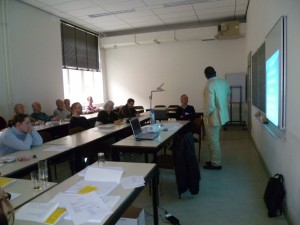 In 2004, I was invited to Russia to participate in a language festival in Volgograd. There was an introduction where they introduced all the speakers and the languages they were presenting. They took over a school for the day and dedicated each room to a different language. I still remember presenting Dutch there, quite an exotic language in Russia! They always invite foreign Esperanto speakers to lecture, so then they present in Esperanto and a local would interpret the lecture to Russian on the fly, so everyone could understand. I still find this to be a fascinating, natural way of introducing Esperanto to the general public. The participants then see Esperanto being used for a useful purpose and understand it (due to the interpretation). They also see that Esperanto speakers are interested in culture, since they organized the language festival after all!

On Saturday, I participated in such a festival in Leuven, Belgium. You can see the list of languages on the program from Bulgarian to Sinhala (spoken in Sri Lanka). The Irish lecture by Seán Ó Riain was particularly interesting since it was given in Esperanto with live interpretation into Dutch. I think everyone was surprised to discover that five of the attendees asked questions in Esperanto afterwards… which made all of us wonder how many Esperanto speakers were lurking in that crowd! 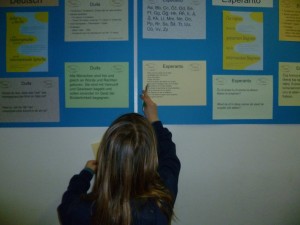 After this meeting, I attended the talk on the Kurdish language, which was given in Kurdish with interpretation to Dutch. Even though I can normally understand Dutch okay, the interpreter’s accent in Dutch was just too difficult to understand for me. After this, I headed to Judith Meyer’s lecture on German. She explained differences in Dutch and German mostly by using a German song with a Dutch translation.

Another surprise was that there were four Esperanto-speaking visitors from other countries, and we could all speak Dutch! Marek Blahuš (Czech) had previously lived in Leuven and I (American) had previously lived in Rotterdam, so that explains us well. The others, however, had a more interesting story to tell. Pete Lypkie (Canadian) and Judtih Meyer (German) had made a January Dutch Challenge to learn Dutch in six weeks. To raise the stakes, Judith decided that she would make her presentation at the language festival in Dutch at the end of these six weeks, which she did! Also, be sure to check out Pete’s report of the language festival from his perspective. 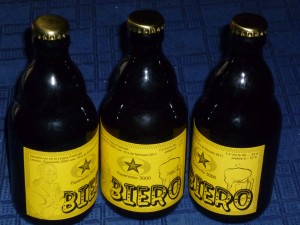 Esperanto beer brewed in Leuven just for this Language Festival!

So, what can top a lecture in Dutch about German? Well, I don’t think anything can, so I headed to the bar to get me some Esperanto beer. The organization Esperanto 3000 brewed a special beer that is sold only at this language festival using their own recipe. I have to say it had a bit of a fruity taste and was quite smooth. Downing some Esperanto beer while chatting with other attendees in the same language seemed a nice way to finish off the event. Afterwards, we went to an Indian restaurant at which point I was surprised to learn that many of the Belgians had never eaten Indian food before, so that definitely added to their cultural experience!

If you want to learn more about the history of this event in general, Wikipedia has a nice article: Language Festival. The largest language festival in the world takes place in Cheboksary, Russia every year in October and lasts eight days: two days of the festival and six days of the “international caravan” visiting a different school everyday. If there’s no language festival near you, organize one in your own city! It seems they work best in medium-sized cities around 50,000-300,000 since it’s large enough to have foreign speakers, but not too large that there’s too many competing events for everyone’s time. Last but not least, you can also attend a language festival online; Lingva Prismo was developed to let you explore foreign languages right from the comfort of your home. In any case, I hope you’ll find some way to join in the global celebration of language diversity!