Amelie Ambrus hits us again with another look at Esperanto literature from another point of view. I personally think this book belongs in every library worldwide, but that would be a bit expensive. However, it would be hard to argue that Esperanto has no culture when faced with the abundant diversity of works created in this planned language. I’d say this book is as essential to a serious Esperanto library as the Plena Ilustrita Vortaro (PIV). You can also read her previous post with an overview of Esperanto Literature. 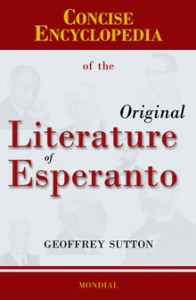 “It may be maintained that Esperanto has for some time been worth learning for knowledge of its original literature alone.” — Geoffrey Sutton’s Concise Encyclopedia of the Original Literature of Esperanto. I think he’s right – but I didn’t realize just how right he was until I read this book.

As I mentioned in the previous entry, it can be a little difficult to know where to get started reading Esperanto literature. Getting recommendations is useful, but it’s also amazingly nice to be able to read about a wider range of what has been written. Who wants to get a postmodernist novel when you’re seeking classical poetry or popular fiction? Also, sooner or later, an avid reader may well become curious about who the major authors are; it would feel weird to have read widely in English but to never have heard of Shakespeare.

The book is divided into literary periods. To get a quick overview of the most important Esperanto writers and their most important works, read the first few pages of each section. Doing so, you’ll learn some basic information about the major authors, periodicals, and major contemporary influences. The periods are:

Within each literary period, there are articles on each author. Each article has a biographical sketch, mentions the original works (or the most important ones for particularly prolific authors), major translations done by the author and of the author’s works into other languages from Esperanto. Details are often given about the works. Geoffrey Sutton prioritizes well; major authors are given several pages, while rudimentary information is provided about merely notable ones. The main article texts are quite lively and readable; they often have translated excerpts of reviews, and mention major influences on and controversies surrounding various pieces.

Major literary schools, such as the Scottish school and Budapest school are mentioned. However, the author resists the tendency to group loosely-connected authors into schools, although he mentions when others do, and they are not an organizing principle of this work.

The book also provides perspective. Throughout Esperanto history, authors from Kálmán Kalocsay through Vladimir Varankin to István Nemere have used Esperanto to express thoughts that they cannot or dare not in their native languages. Their topics have ranged from erotic poetry to political commentary. In a few cases, especially under Stalin and Hitler, this daring cost them their lives; using Esperanto was punishable by death, and using Esperanto to say something sensitive was quite dangerous. In others, Esperanto provided a safe outlet for ideas that their cultures censored. The chronological nature of the book also documents Esperanto’s spread, from Russia and Poland throughout Europe, into Asia and Brazil, and the dawn of Esperanto-language writers from Africa. The influences of authors on each other are also clearly spelled out, heavily relying on quotations from major Esperanto authors and reviewers.

Fundamentally, it’s a reference work. It’s possible to read through it systematically, but quite demanding; doing so brings out the links between authors even more clearly, but the redundancy which make individual articles so useful can become a little tiresome. The introduction to each section, followed by dipping in and reading the articles on any authors who sound interesting, ends up delivering most of the benefit if you want lively overview. In use as a reference, it is incredibly valuable: it clearly and concisely provides relevant information in one source.

What does it actually say about each literary period? Stay tuned for the next blog entry on the Five Periods of Esperanto Literature.

Thanks Amelie for reminding us of this great work! While a bit on the pricey side, I’d still say this book is worth every cent. You can get it today from many online booksellers.