Amelie Ambrus, an Esperanto literature expert, asked me if I’d like her to write some guest posts to help beginners get their feet wet in the ocean of Esperanto books out there. The Hector Hodler Library in the headquarters of the Universal Esperanto Association (UEA) in Rotterdam (Netherlands) has “approximately 30,000 books, with periodicals, manuscripts, photos, music, and other collections.” Their book service has over 4,000 books, CDs and other items. If you live in North America, you’ll definitely want to check out the book service of Esperanto-USA based in the California Bay Area). Anyway, with that abundance of materials, where do you start? 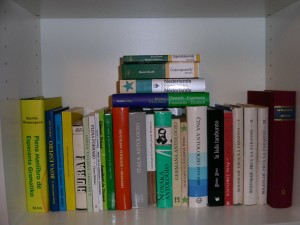 After I became conversational in Esperanto, I wondered what to do with it. I’d heard there were books to read – but I had no idea which ones existed or would be interesting. Luckily, there is something for everyone: you just need to know where to look.

For getting started, read Claude Piron’s Gerda Malaperis! – it’s a mystery, in simplified Esperanto, which progressively becomes more complex – followed by Ulrich Matthias’ Fajron sentas mi interne, a novel about a young German Esperanto speaker. Some people love them, some find them boring, but both are really helpful for easing into reading Esperanto and solidifying your knowledge of the language. Both can be read online, or as physical books. With that out of the way, it’s time for the fun stuff!

Poetry is where Esperanto really shines. William Auld was Esperanto’s most famous poet; his La infana raso was nominated for the Nobel Prize in Literature three times. He also collected some of the best Esperanto poems in the Esperanta antologio. Two earlier poets also shine particularly brightly: Kálmán Kalocsay and Eŭgeno Miĥalski. Kalocsay wrote several books of original poetry, such as Streĉita Kordo. His language is lively and original, and his poetry is stylistically impeccable. Miĥalski’s poetry is often very political, and contains ideas which many readers of this blog may find objectionable, but it is unrivaled in its sheer power. His Plena Poemaro is breathtaking.

Want to get a taste of Chinese, Scottish, or Slovakian literature? Ĉina antologio, Skota antologio, and Slovaka antologio can be the first place you look. There are similar anthologies for many languages and countries, and most of them are really good. Esperanto shines as a language for learning about the literature of other languages: many major works are translated into it, usually by native speakers of the source language who are passionate about literature and what they are translating. When I’ve compared translations into English and Esperanto, the Esperanto one is usually higher quality.

Mondo de travivaĵoj by Tibor Sekelj talks about his travels on 5 continents. It’s full of adventure, from meeting world leaders and cannibals to close brushes with death. Many Esperantists lived truly interesting lives; Vasilij Eroŝenko, a blind Russian, spent much of his life in Japan and China, setting up schools for the blind, and writing original works in Esperanto, Chinese, and Japanese. Bona Espero: idealo kaj realo by Roman Dobrzyński covers the Bona Espero school in Brazil, which educates underprivileged children, using Esperanto. Edmond Privat wrote some of the first and best books on the early Esperanto community, including his autobiographical Aventuroj de Pioniro. Privat also wrote about about his friend Mahatma Gandhi, who he traveled with, in Vivo de Gandhi. [Editor’s note: unfortunately out of print, but an excellent read if you can get your hands on it!] 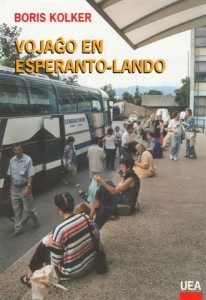 Excerpts of Esperanto literature and great introduction to Esperanto culture

I haven’t even scratched the surface of Esperanto literature; even Geoffrey Sutton’s mammoth Concise Encyclopedia of the Original Literature of Esperanto only covers a tiny percentage of what has been published. It’s an excellent overview, in English. For a softer introduction, Skizo de la Esperanta Literaturo by Eduard V. Tvarožek is decent. Any short book which mentions “Budapeŝta skolo”, “Skota Skolo” and “Julio Baghy” should be fine. Esperantlingva literaturo in the Esperanto Wikipedia also has an decent overview. Also, Boris Kolker’s Vojaĝo en Esperanto-lando is a very readable and incredibly good introduction to Esperanto culture, and has some information on literature.

If you go to Esperanto events, there is usually a “libroservo”, selling books. Talking to the person running it is a great source for further suggestions. The easiest way to buy most books is online, through UEA or Esperanto-USA. Follow those links to browse titles and order books. Many other Esperanto groups sell books, but have smaller selections and sometimes take longer to ship them.

Thanks Amelie for that very informative overview! I now hope our readers will order a few books and take some time away from the screen to get to know some of the great works available in Esperanto. Look forward to her upcoming review of the Concise Encyclopedia of the Original Literature of Esperanto.