Merits and Myths Behind Some Esperanto Symbols: The Esperanto Flag Posted by Leks on Oct 30, 2015 in Uncategorized

The last of the three symbols I’ll cover in this series is la Esperanto-flago, the Flag of Esperanto. Since it as more or less equally as ubiquitous as the verda stelo, odds are you have seen it before. It is a field of green, with a patch of white in the upper-left corner. The green star of Esperanto is perched in the white region. 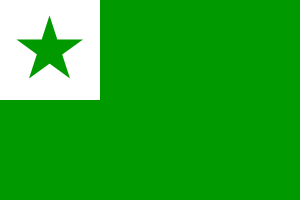 The flag has been around quite a bit longer than the jubilea simbolo. An early version of the flag was observed as early as 1893, when an Esperanto club from northern France designed a flag for their own use. It resembled the flag we know today, but it had an E over the star. The version you have most likely seen has been around since 1905, when the first Universal Congress of Esperanto approved its use.

I’ve heard that, by no small coincidence, this first meeting took place in the same town the flag came from. I wonder whether that’s why they approved the flag…? It’s a pretty cool design, in any case.

Like the green star, the colors of the flag have some significance ascribed to them. Per Dr. Zamenhof’s color associations, the green that covers most of the flag symbolizes hope. It’s fitting that the flag has so much of it, then – Esperantists are a hopeful bunch! The white section stands for peace, as it does on the flags of numerous other nations. Even the placement of the star means something. There is a reading of the green star that claims it symbolizes the earth, with each of its tines representing a continent. Since the official proportions of the flag declare that the star always be inscribed with enough space to see that the white surrounds the star, the flag always contains the symbol of the world enveloped by the color of peace. The flag, if done up properly, thus represents the possibility of world peace.

For all its merits, some Esperantists dislike the Esperanto-flago. The reason? Flags have a nationalistic – or even militaristic – connotation, which does not really mesh with Esperanto’s objectives. Most flags evolved from old war banners, after all, and aren’t often seen in contexts outside of patriotic festivals or military ornamentation. So it can be a little unsettling to see Esperantists using the same sort of iconography, even if it’s for a peaceful end. This might be one of the reasons the Jubilee Symbol came about – as a replacement for the flag.

Which of the three major Esperanto symbols is your favorite? I have to admit that I’m partial to the plain old verda stelo – mostly because it’s easier to draw than the jubilea simbolo!