Merits and Myths Behind Some Esperanto Symbols: The Jubilee Symbol Posted by Leks on Oct 28, 2015 in Uncategorized

Another Esperanto symbol you’ve likely seen in your adventures is the jubilea simbolo, or Jubilee Symbol. It’s an oval-ish shape consisting of six prongs reaching toward one another in pairs, looking like two rounded, mirrored E’s. Some Esperantists who aren’t especially fond of this symbol call it la melono [the melon] in mockery – a comparison that’s rather difficult to un-see once you’ve seen it! I’ve also heard of it being called la ovo [egg] and la rugbea pilko [rugby ball], but I couldn’t tell you whether they have the same spirit behind them as calling the symbol a melon. 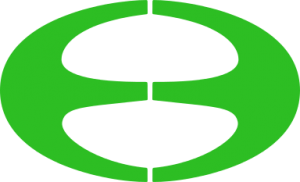 Unlike the verda stelo, Zamenhof had no hand in the making of the jubilea simbolo. It first saw the light of day in 1987, when the World Esperanto Association unveiled it in commemoration of Esperanto’s centennial. Like the green star, its design is taken to signify more than a nifty geometric shape. Those of you familiar with the Cyrillic alphabet might recognize that the right half of the Jubilee Symbol resembles the Cyrillic “Э”. There are two major readings ascribed to the inclusion of a Cyrillic character in the Jubilee Symbol. The first is that it notes how the word “Esperanto” looks in a widely-used, non-Latinate character set (“Эсперанто”), acknowledging the language’s use in cultures outside western Europe. The second has a more specific historical context. Given that the Cold War between the US and the now-defunct Soviet Union endured well into the 1980s, the Jubilee Symbol expressed a hope of global peace. It included both the English E and the Russian Э, joined together as if in embrace, celebrating the universal language and the peaceful mission for which it was invented. The two characters therefore can be said to acknowledge the hemispheric division between East and West, but indicate their coming together in harmony. In this regard, it’s also worth noting that the Jubilee Symbol resembles the earth – a visual reminder of Esperanto’s ultimate goal.

The Jubilee Symbol is green in honor of Dr. Zamenhof’s preferred color, but there are several variants of green that you might see associated with it. Some instances have it in a green like you normally see with the green star, others are a darker hunter green, and some are even pale pea green. I’m afraid I haven’t yet unearthed the reason why… Perhaps one of you readers out there can tell me?

We’ll cover the Esperanto Flag next time. ‘Til then!