Merits and Myths Behind Some Esperanto Symbols: The Green Star Posted by Leks on Sep 29, 2015 in Uncategorized

One of the reasons Esperanto has remained such a recognizable language over the years might have something to do with its branding. Three vibrant, eye-catching symbols mark both the language and the movement associated with it: the verda stelo [green star], the jubilea simbolo [jubilee symbol], and the flago de Esperanto [Esperanto flag]. If you’ve ever picked up an Esperanto book, or browsed an Esperanto interest site on the Internet, or attended an Esperanto event of any kind, chances are you’ve glimpsed one – or all! – of these symbols. Today I wanted to talk about the first of these three, and address a myth associated with it.

Some Esperantists like to think that the green star symbolizes the planet earth. In this system, the green color indicates the land we inhabit – much like what you might see on a simplified image of the globe, where land masses are shown green, and oceans in blue. The five arms of the green star supposedly signify the five continents. 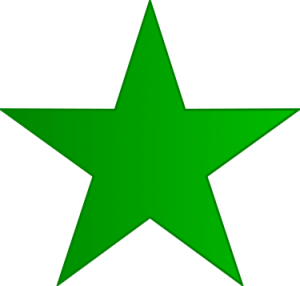 This part requires a little creativity, since almost any schoolchild you ask would tell you – rightly – that our planet has seven continents. I suppose you could say the five continents are North America, South America, Africa, Eurasia, and Australia/Oceania (ignoring the giant mass of ice at the planet’s southern pole). Otherwise, you could lump the Americas together as one continent, and continue ignoring Antarctica, to say there are five continents.

The mental gymnastics necessary to support this reading of the green star should be one indication that it’s a myth. Also, I can’t imagine Zamenhof wanting to ignore Antarctica. Sure, nobody lives there besides scientists conducting research. But Antarctica is one of the few places on earth where you can see earnest attempts at international cooperation and coexistence – take a look at the Antarctic Treaty System. Since Antarctica is a real-world example of the kind of international cooperation Zamenhof dreamed of, I don’t think it makes much sense for one of Esperanto’s main symbol to ignore it.

Luckily for us, Zamenhof himself addressed the emergence of the green star in a 1911 letter to the Esperanto interest magazine, The British Esperantist. He describes the star’s origin as follows: “It seems to me, that my attention was drawn to the color green by Mr. Geoghegan and from that time I began to publish all of my works with green covers . . . Looking at one of my pamphlets that I had entirely by chance printed with a green cover, he pointed out that this was the color of his homeland, Ireland; at that time it came to me, that we could certainly look at that color as a symbol of HOPE. About the five-pointed star, it seems to me, that at first Mr. de Beaufront had it imprinted on his grammar. I liked that and I adopted it as a symbol. Afterward by association of ideas, the star appeared with a green color.”

It’s a bit less exciting than the globally-minded reading of the green star, but at least it’s a plausible origin story. So Zamenhof liked the color green to begin with, and found it stood for promise (given Ireland’s burgeoning independence movement at the time), so he adopted it as a color of hope. As for the star, that seems to be a mere coincidence. Somebody used it on the cover of an Esperanto grammar book, and Zamenhof found it an appealing symbol. It became a green star through the fusion of these two encounters.

Then again, maybe the myth of the green star is the “true” reading. A symbol derives its meaning from what people take it to mean. If Esperantists want to think of it as the world in miniature, maybe that’s the interpretation to which we should defer!