New comic about Esperanto! Posted by Chuck Smith on Nov 1, 2014 in Uncategorized 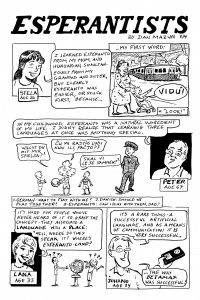 The American comic artist, Dan Mazur, published a 12 page comic about native Esperanto speakers. The comic appeared as part of a comic anthology about subcultures. Libera Folio interviewed the author and you can read the Esperanto translation here.

How did you get the idea? What was your objective?

Earlier this year, I was beginning the work of publishing an anthology of short original comics, by various artists, on the subject of “subcultures,” so I was thinking about interesting subcultures, and I thought of Esperanto speakers as a topic. I didn’t know much about Esperanto, though I’ve known of it since I was a child. I had a vague notion of it going back to the early 20th century, and some association in my mind (probably erroneous) with utopian or idealist movements like the Fabian society. I thought it would be a pretty multi-faceted subculture, since it goes so far back. On my first Google search on the topic, I came upon an article about native Esperanto speakers, and this surprised and fascinated me… native speakers seemed like a subculture within the subculture! At this point I decided that I wanted to write and draw this story myself. I then watched a YouTube interview with Lana Shlafer [below], which had been shot in 2000, and I learned more.

How did you gather the material?

Though I am a cartoonist, I’ve also worked as a journalist, so I wanted to be able to interview a subject for the story. The only local contact I could find was the MIT Esperanto Society. This society turned out to be inactive, but I heard back from a former member, Erin Piateski. She helped with some contacts, and soon I was in touch with 5 Esperantists a mix of Europeans and Americans, four out of five were native speakers, so it was a good mix. I interviewed via email, except for Julie Schwartz, who lives nearby, so we were able to meet. For Lana Shlafer, I used quotes from her YouTube interview. With so many “voices,” I decided to structure the story like a comics-documentary, weaving the interviews together with a little history. I found that there was much in common among the native speakers, especially, but interestingly some differing attitudes toward Esperanto culture emerged as well.

When it was written, as a script, I sent it out to all the subjects for their approval, then I drew the comic. I went back and forth a lot with the subjects to make sure I didn’t make any mistakes in the Esperanto I use in the comic. As you probably have figured out, I don’t speak or read Esperanto myself. Working on this story has made me interested in learning it… Esperanto speakers seem to have a lot of fun!

Where was your comic strip published? What kind of reactions have you received?

The book, SubCultures: a Comics Anthology was published in September, including the story “Esperantists,” which is 12 pages long. As for reactions, i find that people are very interested in the subject matter — many people I talk to have little or no idea at all what Esperanto is. I’m starting to get some interest from Esperanto sources, such as yourself!