Learning Languages Through Esperanto Posted by Chuck Smith on Sep 2, 2014 in Uncategorized

Guest post by Judith Meyer, who normally blogs at learnlangs.com and currently crowdfunds a language course on Indiegogo. 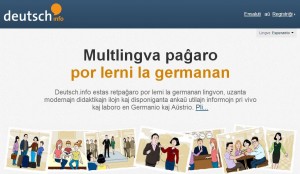 The best are probably www.deutsch.info (to learn German) and www.slovake.eu (to learn Slovak), because these are professionally-developed courses financed by the European Union, which are available in Esperanto and also other languages. The reason they are in Esperanto is because the group who created them, E@I, uses Esperanto as their working language. They are the ones behind
lernu!

Another well-designed language course with Esperanto as the base language is CRI Everyday Chinese. CRI, the PRC’s national radio, also fresh news every day in Esperanto.

Have you heard of Toki Pona? It’s a philosophical experiment, reducing a language to the bare minimum vocabulary and seeing how people will express themselves then. If you want to learn this artificial language, which is actually spoken by several Esperanto speakers I know, you can do so in Esperanto at Tokipona.info .

Many amateurs like you and me have created video lessons for their languages on Youtube. There’s German, Russian, Swahili (my own), Vietnamese, and even Kadazan, an obscure language from Malaysia.

For your next trip abroad, consult one of the many Travel Phrasebooks. This link leads to an Afrikaans phrasebook, but look for the link saying „Montri aliajn versiojn de ĉi tiu rimedo“ at the top in order to choose one of nearly 40 different languages.

I am currently also working on a Mandarin Chinese course, though its initial version won’t be available in Esperanto. It’s a completely new way to study languages, so check it out. And further good news: the Esperanto Association of Britain will support me in developing a similar course for Esperanto, so if you are not yet fluent in Esperanto, you will soon have yet another way to learn it.

Good luck with your studies!