Lauren looks back at the challenge Posted by Chuck Smith on Jun 27, 2014 in Uncategorized 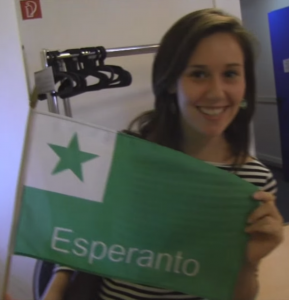 About a month ago, I interviewed Lauren about her experience learning Esperanto in the Six Week Challenge. Now that the challenge is over, I’d like to revisit Lauren to see how things went.

How has everything been studying Esperanto over the past weeks?

To be honest, I wish I would have studied more so that I could’ve used the opportunity at the Polyglot Gathering to practice more in-depth conversations, but I think everyone always wishes that they’d studied more. Other than that, it went great. To me, in the past six weeks, I not only learned Esperanto, but also how to learn a language. I really do feel like I know what I’m doing to start off my next language project. Though I reckon the next one will be much harder, I have a slight advantage now in that I’ll have a really good strategy going into it.

What have been some of the highs and lows?

I think every time I started a new aspect of the language was a low, because each step feels impossible at first. Another low was right before my first Skype conversation. I was extremely nervous. It turned out that I had no reason to be nervous, and it was great, but at the time I was really hoping for a sudden power outage so I could escape it. As for the highs: At the polyglot conference, there were so many unexpected moments when I was thrown into speaking Esperanto and I surprised myself with what I could discuss. One night I had a conversation about auras and synesthesia in Esperanto! Also people kept complimenting my accent and asking if I was “really” a monoglot, which felt good. 🙂 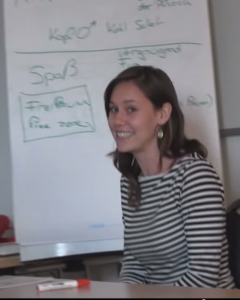 It was also very nice meeting you at the recent Polyglot Gathering in Berlin! [Full disclosure: I was on the main organizing team of this conference.] What was your general impression attending the Gathering and what was it like speaking Esperanto with so many people there?

I loved it! To be honest it was a bit exhausting to socialize in another language for 5 days straight, but I had so much fun. There are a lot of people I can’t wait to see again at other events. And there were several really, really impressive polyglots there. I especially liked the polyglot games and watching everyone strut their stuff a little bit and get competitive with it.

I remember you being a bit nervous about giving a 1-5 min lecture in Esperanto at the Gathering. How did that go and would you recommend it to others?

I am one of those people who gets incredibly nervous talking at a group of people in general – even in English. The fact that I was speaking in Esperanto for the speech wasn’t the hard part. I just don’t like giving speeches. For me personally, I prefer to suddenly have to speak the language without knowing that it’s coming. Like leaving our dorm room and turning a corner and running into an Esperantist and having a chat. Those were the moments I enjoyed the most. But preparing to give a speech did help me learn a few new words that I didn’t know beforehand (like community). 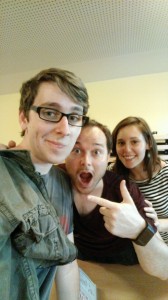 Now that the challenge is over, what are your future plans for Esperanto?

I am going to read books in Esperanto! I got that as a gift from an Esperantist at the conference, as well as a book called “La Krimo de Katrina.” I’m definitely going to keep improving my Esperanto, and I hope the next time we chat in person my level will be even higher 🙂

Has this experience inspired you to learn more languages?

Thanks for the interview and I look forward to seeing you at another language event in the near future!