Lauren’s 6-week mission to learn Esperanto Posted by Chuck Smith on May 19, 2014 in Interview, Uncategorized 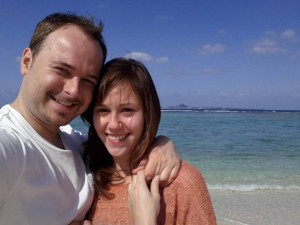 Benny and Lauren in Okinawa (Japan)

Today we’ll be talking with Lauren, who just started to learn Esperanto in Ireland. But, what makes this different from anyone else? Well, some of you may know Benny Lewis, the blogger of Fluent in Three Months (FI3M) who often challenges himself to learn a language in a short time and then blogs and talks about his progress on his YouTube channel. In the Esperanto world, he’s most known for his blog post Just 2 weeks learning Esperanto can get you months ahead in your target language. For his most recent mission, he decided not to learn a new language, but rather to coach his monolingual girlfriend to learn Esperanto in 6 weeks. She’ll then speak Esperanto with others at the Polyglot Gathering in Berlin! So, on to the show…

Lauren, why did you choose to learn Esperanto? How did this mission come to be?

When I first started dating Benny, the first question anyone who knew him would ask me was “How many languages do you speak?” So for a while, I went through a stubborn phase of not wanting to learn a new language because I was annoyed at the assumption that dating a polyglot meant that I should be a polyglot as well.

But we’ve been together for around a year now, and I’ve gotten over that phase. 🙂 So, Benny’s always known that there’s one language–I won’t say which–that I’m very keen to learn, and he had discussed the idea of running a +1 Challenge on the blog this summer, (and he probably will!) where he’d invite readers, other polyglots, some of the other FI3M team members, and me to all take on a new 3 month challenge together. We thought this would help a lot with my motivation to get through my first project.

But then, Judith Meyer messaged Benny to say that she was running a 6-week Esperanto challenge with the summer as the end-point, and Benny thought that this would be a perfect opportunity to ease me into language learning and give me a boost for my summer project. Also, Esperanto is one of Benny’s favorite languages, and he was very excited by the idea of me being able to speak it. So even though I personally wouldn’t have picked Esperanto as my first new language, the idea of being able to speak one of his favorite languages with him gives me great motivation 🙂

That sounds great! I think you’ll enjoy having a secret language together… well, except at polyglot meetings. In any case, I want to applaud your courage. Starting to learn a language can already be intimidating, but how does it feel showcasing the whole learning process in front of all of Benny’s subscribers?

Well, thank you. 🙂 Honestly, I don’t think about the subscribers during the week while I’m practicing. Benny sets up the camera, and I study like it’s just him and I in the room. At first it felt weird to practice the language with him listening in the room–and he’s ALWAYS in the room since we travel together in short-term accommodations!–but that passed quickly. You just get over it. My worries aren’t that I won’t progress in the language or that I’ll fail–Benny and so many other Esperanto speakers have a lot of confidence that 6 weeks is plenty of time to get to a conversational stage in the language, and I have faith in their expertise.

The only thing that really makes me nervous is every week, I fear that the video update will be so terribly boring! After all, it’s usually just compilations of me talking to myself to my computer or complaining to Benny about memorizing verbs! But so far, the response has been so positive, and we’ve gotten several very touching emails from people who’ve said this project has inspired them to keep on with their own projects. I did not expect that, and it has really moved me and made me feel more courageous to keep going despite how boring I fear the videos may be.

Well, I may not be able to speak for everyone, but I find them really interesting at least! In the first video [above], I even saw you chatting online in Esperanto. I remember when I was starting to learn Esperanto, I spent quite a lot of time in chatrooms, being corrected and improving. What was your experience like the first time you chatted in Esperanto online? Was that in the lernu.net chatroom?

Yes, I have used the lernu chat room exactly once, sort of by accident. More often, I’ve been sending messages back and forth privately on lernu as well. I like that better for now, because I need a lot of time to think about what I want to say and how to say it. But at the end of my first week when I wrote out my introductory phrase for the video (“Mi komencis lerni tiu semajno”), and I wanted to ask for a correction, I logged onto the chatroom. I learned how to say “Is this phrase good?” (“Ĉu tiu frazo estas bona?”) and then pasted my phrase in. I got an immediate correction, which amazed me, and you can actually see this moment in the first video.

What you don’t see is after that, when the very friendly chat room people tried to talk with me more by asking where I was from and so on… and then I kind of freaked out. I had no idea how to form sentences at this point, and I was terrified. But I have to say, they were very patient with me even though I took forever looking up the words I needed to type out my answer. And then I chickened out and said I had to go (in Esperanto), and they wished me a very kind goodbye. I haven’t used the chatroom again yet, because I’m enjoying sending private messages with my exchange partner. Having said that, I absolutely will be using it to push my level up [maybe] in a week or two when I’ve fixed my current problem remembering verbs. 😀

I’d say you’re pretty fortunate to have a language coach with so much language learning experience as Benny. But, as we’re all aware, the ability to learn and to teach are quite different skills as I’ve been learning lately as I’ve been getting back into Esperanto teaching. Has Benny already done a lot of language coaching or is this new for him as well?

Well, I may be a little biased, but Benny really is an amazing language coach. I am very lucky to have his guidance. He knows exactly what to say when I’m feeling deflated and how to keep my spirits up and keep me moving forward. But that comes with his experience. He’s been working as a language coach in addition to the blog for a while now, helping other individual learners like me and businesses. Because he’s been learning languages for so long (an entire decade) and documenting the “hacks” that work, as well as those that don’t, he has such a good understanding of what learners need at different stages of this process. He’s been so patient with me, and very stern about making me an independent learner in my own right. He kind of teaches me how to teach myself, if that makes sense, and he really stresses the importance of keeping it fun, which helps a lot.

It looks like you’ll keep learning and having fun with it. Thank you so much for your answers and I’m already looking forward to see your progress on next week’s blog post. Bonŝancon! [Good luck!]

Dankon pro via kuraĝigo! [Thanks for your encouragement!]