New Games in Esperanto Posted by Chuck Smith on May 15, 2014 in Uncategorized

What do you think about when you think of Esperanto culture? Probably books, events… maybe music? Today I want to address a part that isn’t often discussed: games! I recently founded a company, which makes games in Esperanto (as well as other languages). Considering that I can’t write about this unbiasedly, here is an English translation of the most recent article from Libera Folio: Novaj ludoj en Esperanto.

What does your company, Ludisto, do?

We make fun games for phones, tablets and microconsoles. We now have games on iOS and OUYA (an Android microconsole) and are continuing to port Poker Solitaire to new systems like Fire TV, Android and Windows Phone.

Why is it important to you that the games are also available in Esperanto?

Games are a vital part of our culture, but there are very few modern video games in Esperanto. We want to lead this change. We’re sure that the Esperanto community also likes to play in Esperanto!

In a relatively simple card game, the game’s language isn’t really important, right? Are you planning other games where language plays a more significant role? 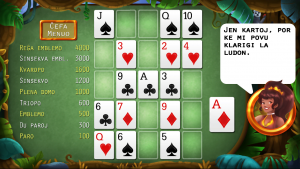 The language is indeed important for learning the game, but why does everyone always have to play in English? I would prefer that there would be more games to play in Esperanto and my company is helping towards that goal. People always talk about how many Esperanto books exist, but rarely about other games, films etc. A varied and multifaceted media landscape is crucial to any language community.

What interest has there been so far in your language game Word Race? Has it been downloaded many times? Did you make a lot of money with it?

In that time, the market moved to a model of free games with in-app purchases, and Word Race as a product was not too suitable to that market. Because of the fast changes in cell phone markets, it’s often difficult to predict such important market changes at the beginning of a project.

Despite that, players have given it very appreciative reviews. Like my educational app Intense Esperanto, Word Race has been downloaded more than 12,500 times, but for a free game, you typically need millions of players to make good money.

Anyway, immediately after I launched Word Race, I started working at a large game company. That means I couldn’t dedicate as much time as I wished on this game. I’ve learned my lesson, and I’m devoting a lot of effort on publicizing Poker Solitaire. Of course it helps that I really love playing and talking about the game. In any case, I’m looking forward to hearing what your readers think about Poker Solitaire!