Today, Libera Folio wrote about the first Esperanto game for iPhone. Amusingly enough, I produced this game, so this article may not be as unbiased as usual. What follows is a translation of their article: 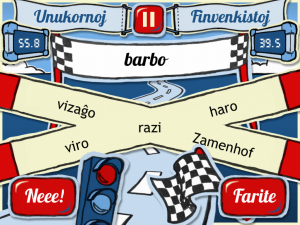 The first Esperanto game for Apple phones and tablets was officially released today, although with an English name: Word Race. Chuck Smith, the well-known American Esperanto speaker, now living in Germany, created the game, which besides being playable in Esperanto, can also be played in English and German. In addition to the iPhone or iPad, you need friends who speak the same language – it’s not possible to play it alone. A trial version of the game has already been presented at various Esperanto conferences, according to Chuck Smith, with success. We asked him to tell us more.

Libera Folio: What is Word Race? How do you play it?

Chuck Smith: Word Race is not an ordinary game. It’s a game, which you can play with 4 to 20 players with only one iPhone, iPod Touch or iPad. You need to explain a word to your team without using the forbidden words. So, you have to very cleverly think of the best way to help your team figure out what you’re trying to convey. That way it’s also a great way to practice Esperanto!

Libera Folio: How did you come up with the idea to make an Esperanto game?

Chuck Smith: There used to be this iPhone game I frequently played with friends, which worked the same way. Then, we asked if we could translate the game into German and never heard back from them. Afterwards, we had the idea that we could probably make an even better game, so we did that and also added Esperanto cards.

Libera Folio: How much does the game cost?

Chuck Smith: The game itself is free, but that only gives you 42 cards to try it out. If you like it, you can buy more word packs. For example, our general word pack only costs US$2.99 as an opening offer (it normally costs $3.99). Afterwards, we even want to make a word pack just about Esperanto culture!

Libera Folio: How can you get it?

Chuck Smith: It can be purchased from the Apple App Store, which can be found from the link on our website. I would like to know what everything thinks about it! If you like it, I would be very happy, if you could write a review in your country and language in the store. I playtested it at many different Esperanto meetings and everyone liked it… I hope, that your readers will like it too!