I love you in Esperanto Posted by Chuck Smith on Feb 14, 2012 in Uncategorized 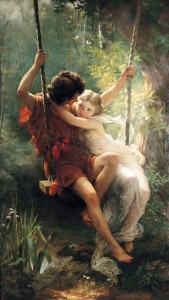 Feliĉan Valentintago! [Happy Valentine’s Day!] Want to surprise that special someone by telling them, Mi amas vin [I love you] in Esperanto? Well, now you know how!

So, on this special day, you might want to pick up some ĉokolado [chocolate] at the superbazaro [supermarket], or floroj [flowers] from the floristo [do I really need to translate this one?]. It could also be pleasant to give a karto [card] to your amato or amatino [loved one].

After giving that karto, you could go to a restoracio [restaurant] or a kinejo [movie theater]. Our Australian readers might like a romantika promenado en parko [romantic stroll in a park]. If you don’t have a car, you’ll first promeni en parkon [to stroll into a park]. Note the accusative -n ending denotes movement, whereas without the accusative, it means that you’re just walking within a park… I’m guessing you drove there! While you’re at the park, you might am-ind-um-i [literally: to love-worthy-do], which could be holding hands, kissing or cuddling.

Despite all the word building examples above, this is not just a textbook exercise. Many people find love with someone in the international language. Such relationships often lead to native Esperanto speakers. For more about that, see my interview with native speaker Rolf Fantom (another native speaker interview coming soon). On The One Show, there was even a story about a British/Slovenian couple who meet through Esperanto and didn’t even have another language in common. Watch it for yourself below (starting at 2:48):

There is even an Esperanto magazine called Familia Esperanto as well as family Esperanto events such as Printempa Semajno Internacia [International Spring Week] with the next one taking place in Bonn on April 2-9, 2012. There Esperanto families meet, Esperanto-speaking kids play together, etc. The Internacia Infana Kongreseto is also worthy of note, in that it lets Esperanto parents bring their kids to the Universal Esperanto Conference and let their kids play and chat with other kids from around the world.

Have you found your ampartnero through Esperanto? Had kids together? Tell us more in the comments!