From Moon Zombies to a House of Ghosts Posted by Chuck Smith on Jan 29, 2012 in Uncategorized 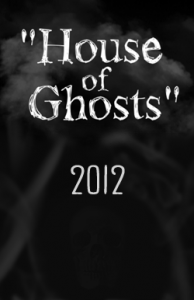 I’m back with Christopher Mihm, talking about his upcoming film, Domo de Fantomoj [House of Ghosts], which will be subbed and dubbed into Esperanto! You might remember him better from his previous film, Attack of the Moon Zombies…

Going back to Moon Zombies, how did its release in Esperanto make it different than your previous movies?

Having the film available in Esperanto allowed it to screen in many new places all over the world — places none of my previous films have played like Brazil, Poland, and Denmark. Being able to have my films seen internationally is a huge step forward and I credit Esperanto with that specifically!

Why do you believe that Esperanto speakers are interested in your films?

I think, if nothing else, there are so few Esperanto language films out there that almost any that are worth watching (as I believe mine most certainly are) are worth seeing. My films are family friendly — meaning “safe for kids” but not made specifically for them. If an Esperanto speaker wants to introduce his children to the language, my films might be a way to do it. My films are just plain fun and can make for a fun night of entertainment for groups of speakers who are learning (they make great teaching tools) or are fluent and want to enjoy a little bit of goofiness! Lastly, one of my goals is to indirectly erase the “bad taste” the 1960s William Shatner Esperanto movie “Incubus” left in the collective mouths of the Esperanto community. That film is so infamous for butchering the language that I want my films to be considered the film that “Incubus” should have been! So, I think that may be happening a bit.

Why did you choose to dub and sub another film for us?

The Esperanto community has been so kind and supportive that it honestly seemed wrong in some way not to do a House of Ghosts audio and subtitle track! Plus, working with the language for Attack of the Moon Zombies has made me quite interested in it generally. I figured doing it again will help further my understanding of the language.

Your further understanding of the language… does that mean you’ve actually started learning Esperanto? If so, what inspired you and how is that going?

It is true. After dealing directly with creating the spoken audio track for the last film, I realized I was starting to pick up the language a bit — it really is that easy to learn! All my life I’ve really struggled learning other languages — something I’ve always wanted to do. Being exposed to a language as easy to understand as Esperanto gives me hope I can overcome that difficulty. Sadly, my studies are coming along far slower than I would like which can be attributed specifically to the amount of time I spend working my day job, creating the films and maintaining the “Mihmiverse,” and raising my family!

What impressions do you have of the Esperanto community?

The Esperanto community has been wonderful. They’re great people who have been extremely supportive and friendly, both in how they’ve received my film but also in helping me to learn the language. I couldn’t ask for a nicer group of people!

What role do you think Esperanto would ideally play in the world?

The thing I find most amazing is how the original stated purpose of the language seems to actually be happening within the community. The language really does seem to bring people together. The Esperanto spoken tracks on my films are a great example of this. You have people from all over the world adding their voice to the film, and their only common attribute is that they speak Esperanto. That, to me, is the role Esperanto should play in the world: bringing people together!

Lastly, how can the Esperanto community support your new film?

The biggest thing the Esperanto community can do is to spread the word. Set up screenings and events or even gather your group of Esperanto-speaking friends and give the films a try! If nothing else, they’re entertaining, fun, and safe for the whole family!

I’d like to ask my readers to be sure to check out your Kickstarter Esperanto campaign. I wish you the best producing this film!