Learn Esperanto and win a free vacation! Posted by Chuck Smith on Apr 26, 2014 in Uncategorized

Always been wanting to learn Esperanto, but haven’t had a big enough reason to motivate you yet? Well, now might be your chance! Along with the Polyglot Gathering in Berlin, Judith Meyer has thrown down a new challenge. For anyone who has studied Esperanto for less than five hours, learn as much Esperanto as you can for six weeks (starting May 1) and then give a 1-5 min lecture on a topic of your choice! If you’ve already studied for five hours, then let your friends know who have been thinking of dipping their feet into the language.

But, given that this gathering has been sold out for about a month now, what can you do? Fortunately, there’s also an Internet division. So, register for the 6 Week Challenge via the Twitter bot (use the hashtag #Transparent when you register to join the Transparent Language team!), learn Esperanto for six weeks reporting your daily study progress, and then post a YouTube video of yourself giving a 1-5 min lecture at the end. Here are the contest details. If you don’t want to interact with the Twitter bot, you could also just log your progress on your blog instead.

Now, for those of you who read the blog title, you might wondering what fabulous prizes you could win. You’ll get all the program costs covered as well as food and lodging for a week at an Esperanto event (travel costs not included). Possible events include: 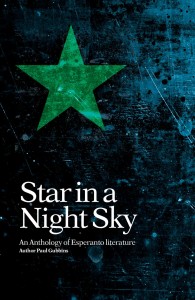 The second prize is a copy of the book Star in a Night Sky, a bilingual anthology of some of the most amazing
writings in Esperanto, donated by the Esperanto Association of Britain. The third prize is a DVD of the documentary The Universal Language, donated by the director himself, Sam Green.

To get started on this challenge, I’d recommend joining lernu.net and taking their online classes there. If you live near Berlin, I’d welcome you to come out and learn from me personally on May 3-4 at the Intensive Weekend Esperanto Course! Then, once you get the basics of the language under your belt like pronunciation, head to the Esperanto Wikipedia and read all about your speech topic, so you know the words specific to you.

Whether you win or not, it should be a fascinating experience to see how quickly you can progress in Esperanto with a clear goal of giving a short speech at the end. If you’ve already studied five hours of Esperanto, but still want to learn a language, even though you’re not eligible for the contest, you can still sign up for the Six Week Challenge to focus on improving the language of your choice. The only requirement for that, is that you sign up with the Twitter bot (use the hashtag #Transparent when you register to join the Transparent Language team!) and log your study as you progress. Whatever you choose to learn over the next six weeks, I’ll be right alongside improving my French as you can see by the 6WC leaderboard (challenge starts on May 1), so see if you can beat me. Good luck!