Review of The Universal Language documentary Posted by Chuck Smith on Jul 8, 2011 in Uncategorized 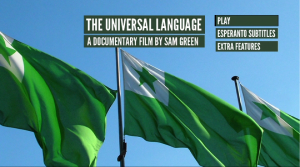 After seeing Sam Green’s Utopia In Four Movements, I was very excited when his new DVD The Universal Language appeared in my mailbox. It’s a half hour documentary about Esperanto from a relatively neutral viewpoint about the language. From a technical viewpoint, he does a very good job producing a professional documentary, even including archive clips and photos with footage from old conferences and even Zamenhof himself!

In the beginning it starts out very promising asking, “Why do I think you might be interested in learning that language [Esperanto]?” followed by a short introduction of the language. Throughout the documentary, he has interesting interviews with several prominent Esperanto speakers including Arika Okrent, the author of In The Land of Invented Languages. Of her interview, my favorite part was when she mentioned a very interesting tidbit of Esperanto history. I’m speaking of the Texel Island in the Netherlands. There stands a large Esperanto monument where in 1935, there were 1000 people who spoke Esperanto in a place with only 8000 people. Can you imagine that?

The documentary also stars Humphrey Tonkin, a former president of the Universal Esperanto Association who is now a professor at the University of Hartford. He does a splendid job presenting Esperanto in a very positive way without ever making it feel like propaganda. I especially loved when Tonkin said, “What Zamenhof did was not really create a language. He wasn’t interested in the language as a language. He created a community and a history in effect from scratch. This was brilliant and it worked!”

In short, Green presents the history well, but there’s very little focus on how Esperanto can be used today. As a historical documentary, he hits the nail on the head, but when it comes to current usage of Esperanto, it falls quite short. For example, there’s no mention of the Esperanto hospitality network, Pasporta Servo, books, music, and other ways to use Esperanto today. In fact, the only event he covers is the Universala Kongreso de Esperanto in Yokohama, but unfortunately a lot of the documentary consists of Esperanto speakers in front of a white screen, often when they’re not expecting the footage to be used in final production. To his credit, he does show how widely Esperanto is spoken by presenting Esperanto speakers from all around the world, including more exotic countries like New Caledonia, Nepal and Iran.

I’ve exchanged many emails with Sam Green and I know he means well. I personally think he finds Esperanto’s history fascinating while I’m personally more interested in ways to use Esperanto today. To be fair, you do hear a lot of Esperanto spoken naturally (with English subtitles), showcasing it as a real, living language. His interview with a native Esperanto speaker, DJ Leo Sakaguchi helps to show the life and importance of the language as well. Also, he makes good use of Esperanto music throughout the film which further helps to show off more of Esperanto culture.

Due to the assistance of the Esperanto workgroup Filmoj Sen Limoj, the DVD includes subtitles in Esperanto making it suitable for showing at your local Esperanto club, especially outside English-speaking countries. All in all, even though it’s not perfect, it’s quite a nice film, and I’d especially recommend it to anyone interested in Esperanto’s history. The DVD will soon be available for purchase on the official documentary website.