Polyglot Conference in Budapest Posted by Chuck Smith on May 22, 2013 in Travel 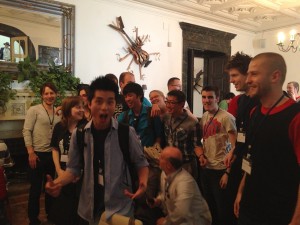 Brian Kwong and other polyglots

Greetings from Budapest! This weekend I attended the Polyglot Conference here. There were people in attendance from all over the world, giving lectures on such varied topics as Learning endangered languages through music to How conflict management works in bilingual situations. There were also an introduction to Esperanto by Eva Fitzelová and the non-profit organization E@I by Zsófia Pataki.

As those who speak Esperanto know, many of its speakers also speak many other languages. We even have an inside joke that “Esperanto speakers are people who need Esperanto the least!” Back to the conference, I was pleasantly surprised to learn that thirteen(!) of the hundred participants speak Esperanto. These include some big names from the polyglot community such as Richard Simcott of Speaking Fluently and Judith Meyer of LearnLangs, Benny Lewis of Fluent in Three Months. 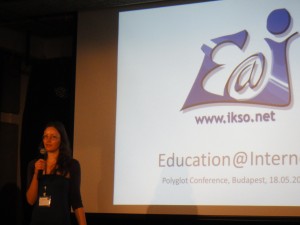 Benny has even written Just 2 weeks learning Esperanto can get you months ahead in your target language, which I’d recommend sending to those critical of Esperanto’s usefulness. His basic argument is that, counterintuitively, by spending two weeks learning Esperanto, you can get miles ahead in the language you want, because it teaches you how to learn a language very quickly. I also learned of a Budapest language school, which starts each beginner course with a quick overview of Esperanto grammar to accelerate each student’s progress in their language of choice.

Besides that, Susanna Zaraysky is currently working on a documentary of how foreign language knowledge has saved peoples’ lives. She is focusing on the Ladino language (a 500-year-old dialect of Spanish) and tells a story of a Jew from Sarajevo who escaped from a Nazi train and managed to talk with and Italian colonel with Ladino with the colonel replying in Italian. We also learned of how George Soros escaped from Hungary by attending an Esperanto conference abroad. If you know of others whose language skills have saved their life, Susanna would like to hear from you!

Anthony Lauder of Fluent Czech explained the differences between how newbies try to learn languages and how polyglots learn them. He also explained how to learn 9 languages as you can see from the picture below! Basically, newbies work too hard on vocabulary instead of moving on to real native materials in their target language as quickly as possible. They want to look up every unfamiliar word in a dictionary rather than trying to guess them and move on, later comparing guesses based on their context. 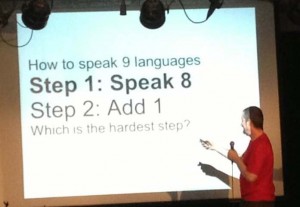 If you’ve already been studying Esperanto for a little while, I’d highly recommend moving on to reading a real book like Fajron Sentas Mi Interne or Karlo… but you could also listen to podcasts like Verda Radio. If you’re a bit further along, I’d recommend starting to read Esperanto literature or even the 24 hour Internet radio station Muzaiko. To reach fluency faster, he also recommended the quick read How to Improve Your Foreign Language Immediately

In any case, if you ever get a chance to attend a Polyglot Conference, definitely jump on the opportunity! It’s such an amazing and open community, and an excellent chance to practice all those languages you never get around to speaking. Even if you only speak two languages, I’m sure you’ll find plenty of interesting people and talks there. The next Polyglot Conferences are planned to be held in October 2014 in Montreal and New York City, so I hope to see you there!

Update: Benny Lewis and Alex Rawlings just published their own interesting blog posts, so check them out to experience the conference from other angles!