Promoting the Esperanto Wikipedia (Part 4 of 4) Posted by Chuck Smith on Jan 15, 2011 in Uncategorized

So far, we’ve gone from finding the Esperanto Wikipedia, to founding it, to the technical modifications necessary to make it work smoothly. If you haven’t read the first three parts, I’d highly recommend doing so first. Now, time to get the word out!

After the major technical problems were handled, we felt it was ready to publicize on a wide scale. I remember Erik Zachte (a Dutch Wikipedian) once told me that he envied our Wikipedia, because Esperanto speakers already consist of a worldwide community making it much easier for us to spread information to all of our speakers, despite the great distances we have apart. On January 15, 2002 (the one-year anniversary of the English Wikipedia), we published short articles in two online news sources which are no longer published: Eventoj and NUN. A week later, we were listed in the Yahoo! directory.

Next, we pulled out the big guns. On March 1, we had an article in the magazine Esperanto, the largest distributed magazine in the world. On April 28, my first interview was heard around the world on Radio Polonia. To take things even further, I decided to travel in mid-July to see the world and give lectures in Esperanto about Wikipedia. 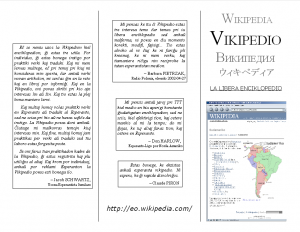 A week later, I gave my first lecture at the International Youth Congress of Esperanto in Pato Branco, Brazil. I remember that I was so not used to speaking Esperanto that I occasionally had to ask the audience to help me out with unfamiliar words. However, they seemed really interested in the revolutionary project and were very patient in listening to this beginner Esperanto speaker. I made sure to have flyers to pass out, so the project wouldn’t be forgot when participants returned home to their native country.

I tried to lecture about Wikipedia at the World Congress of Esperanto in Fortaleza, Brazil a week later, but was informed that only member organizations of the Universal Esperanto Association (UEA) may speak there. I’ll never forget having to look on as I saw the group of katamantoj (cat lovers) meet, but yet I wasn’t allowed to speak formally about the project. How frustrating! However, in hindsight, I imagine UEA gets the full gamut of requests to speak about pet projects which they politely and appropriately need to turn down. I’d guess that the Esperanto Wikipedia only had about 3,500 articles at the time, so not a very big project indeed.

I then went on to speak at the Konferenco pri Aplikoj de Esperanto en Scienco kaj Tekniko (KAEST, Conference about Applications of Esperanto in Science and Technology). I still to this day remember that the first question from the audience was about a grammar error in my presentation. Some things never change I guess. The second question started with, “Now, I have a question about the content.” Nice. In any case, the older crowd was mostly skeptical about this young beginner Esperanto speaker trying to create an encyclopedia.

Thank you for joining me on this whirlwind tour of the early months of the Esperanto Wikipedia. As of this writing, the Esperanto Wikipedia has over 140,000 articles. Did you know that today, Jan 15, 2010, is the 10 year anniversary of the entire Wikipedia project? I still can’t believe how far it’s come. Celebrate with a friend by reading and editing some Wikipedia or attending a local Wikipedia party in your city today!

If you’ve enjoyed this series, you would also enjoy this post: Czech Wikipedia translated from Esperanto?