Esperanto documentary: The Universal Language Posted by Chuck Smith on Jan 12, 2011 in Uncategorized

Today, Sam Green returns to us with answers to burning questions about the first documentary about Esperanto from a third party: The Universal Language. In case you missed our last interview about his previous live documentary, you can read it at Interview about Utopia in Four Movements. I can’t wait for The Universal Language to be released, but in the meantime, we can at least enjoy the tidbits of info we get from him in this interview! 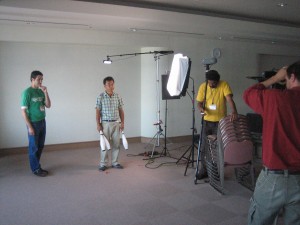 Filming at the Yokohama Universala Kongreso

What is your target audience for this movie?

I’m hoping to make a documentary film that will resonate with both Esperanto speakers and non-speakers alike. That can be a bit of a challenge because, obviously, the two audiences will approach the film quite differently.

For Esperanto speakers, I hope that the documentary will be meaningful. As far as I know, there’s never been a significant documentary about Esperanto before. In the several years I’ve spent working on this project, I’ve unearthed a lot of great archival photos and footage. I’ve also attended several World Congresses and have interviewed many Esperanto speakers. Obviously, not all Esperantists are alike, and there’s a wide range of experiences and sensibilities within the Esperanto movement. I’ve tried hard to make a documentary that is as fair and as accurate as possible.

For a non-Esperanto speaking audience, I hope that the film will raise awareness of the language and encourage people to take Esperanto seriously. As you know, when Esperanto appears in the media it is often as a joke or novelty. I see my film as part of a recent spate of projects that look at the language in a serious manner. Arika Okrent’s book would be a good example of this. Ultimately, I feel strongly that “The Universal Language” will be good for Esperanto. Several years ago, I made a film about a radical political group in the US called the Weather Underground and the documentary went a long way in changing the way the group was perceived. I am hoping that this film will have a similar impact.

Where will it be shown?

I am going to finish the film in early 2011 and start to screen the film at film festivals around the world. I’m assuming that the film will also be broadcast on television in 2011, both in the United States but also internationally as well. I will eventually start to distribute the film on DVD through Sam Green and also probably through iTunes and other online services.

How is it being financed?

I’ve paid for the film mostly through small grants. I got a grant from the National Endowment for the Arts in the United States as well as some funding from other arts organizations. I also received a grant from the Esperantic Studies Foundation.

Why would someone want to finance a film about Esperanto?

It’s a fascinating story and movement, and most non-Esperantists know very little about it.

Why don’t you have the word “Esperanto” in the film’s title?

Coming up with a title is always tricky. With titles, I look for something that is both intriguing in some way and also has a bit of poetry to it. I feel like “The Universal Language” as a phrase evokes the underlying hope and worldview that are a fundamental part of Esperanto. And it sounds good. I didn’t make any kind of conscious decision not to include the word “Esperanto” in the title; this just felt like the best title I could come up with.

What do you yourself think about the idea of Esperanto and its movement?

I learned early on in making films that when you pick a subject, you are going to spend several years immersed in it and thinking about it—it’s damn important that you pick something that you actually like! And so it is with Esperanto. I’m a big fan and very fond of Esperanto and the Esperanto movement. I have long been inspired by what the language represents in terms of a hopefulness and imagination for the future. I’m also interested in how Esperantists have been able to reconcile Zamenhof’s dream for the language with the world we live in today. All of the films I have made have been attempts to try to gain some understanding of the present—the complex moment we find ourselves in. I do think that looking at Esperanto history can give us insights into a broader history of the 20th century and the shadow that that time still casts over us today.

I heard that some Esperanto speakers think that your film Utopia in Four Movements was not enthusiastic enough about Esperanto. After having seen the film, I personally disagree, but some still say it focused on Esperanto as a utopia, not showing much of its practical use. What was your inspiration for making The Universal Language when you’ve already covered Esperanto in your other film, Utopia?

The live documentary and the separate stand-alone documentary I am making about Esperanto are two very separate things, and I can imagine that this might be confusing.

The “live documentary” is called Utopia in Four Movements, and one of the sections of that film is about Esperanto. With Utopia, I look at the history of Esperanto during the 20th century as a kind of metaphor for the rise and fall of a modernist worldview—a great belief in progress, science and rational thinking, and the power of people to make a radically better world. Esperanto and modernism flourished together in the early 20th century. Today, we live in a world where much of that hopefulness and belief is gone. Utopia in Four Movements is an attempt to try to make sense of this very different world today.

My sense is that almost all the Esperanto speakers who have come to see Utopia in Four Movements have reacted positively to the piece. You yourself wrote to me after seeing it that it was “the most moving performance of my life.” There are some people who saw an early excerpt from it online and were critical, but that is not an opinion based on a real sense of the piece.

The “normal” documentary I am in the process of finishing—The Universal Language—is a traditional 30-minute film with interviews and the like. It’s much more of an in-depth history of Esperanto and a portrait of the Esperanto movement today.

It does not look at Esperanto through the lens of utopia. This new film features Renato Corsetti, Humphrey Tonkin, Arika Okrent as well as many other Esperanto speakers. If people want to join the mailing list and receive updates about this documentary and info about how to buy a DVD, they can email me at esperantodocumentary@gmail.com.

Thank you very much for your hard work in spreading the word about Esperanto and I can’t wait to see the movie!