Last week I talked about my love of driving in France. I even love to drive in Paris (zipping around Paris at night to catch the sights in their full lit-up splendeur is hard to beat for sheer joy!) but it’s not for everyone. Fortunately there are more and more ways to get around the city. Whether you want to go your own way, have a tour, or maybe something somewhere in the middle is more your speed, vous en avez maintenant l’embarrass du choix (you have your choice!). 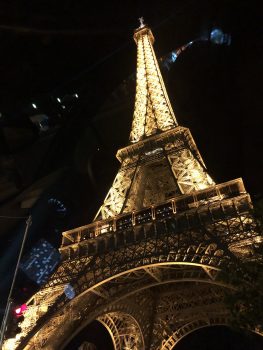 A picture of the Eiffel Tower my son snapped as we drove by on our way home from dinner our first night in the city.

Going your own way

Si comme moi (if like me) you like to explore a city on your own, there are plenty of great ways to get around Paris. Paris is one of the world’s great walking cities. And as long as there are no grèves (strikes) the Métro and bus system provide the perfect respite when you’re tired of walking. And for a water view of the city, you can of course emprunter les Batobus. 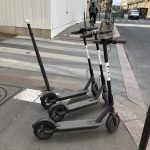 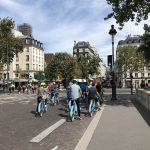 If you’d rather not walk, but you still want to move around on your own, you can now rent both des trottinettes (electric scooters) and des vélos (bicyles) to get around the city.

Les trottinettes are so new that we didn’t see anyone using them on our recent trip, but we did come across some available on the trottoir (sidewalk).

And, while judging from the news there are some issues with the bike sharing service Vélib’ Métropole as they transition to new management, we did see many people enjoying a ride around the city on the widely available bikes.

Getting a little help

If you want to combine flexibility with a little more direction, Paris (like many cities around the world) is now home to a number of hop on / hop off bus services that let you buy a single or multi day pass that lets you get on and off their buses as many times as you want at stops around the city. This is a great way to move quickly from major sight to major sight and see more of the city in a short time than you could on your own. Bus rides typically include a bit of narration about the city and sights and if you’re lucky enough to get a seat on the open-air top of the bus, you get a great view of the city.

If you’d to get your own private tour, a great way to see the city is in a Citroen 2Cv. These classic French cars (as mythic in France as the VW Bug is in some countries) are a fun way to see the highlights of the city in the company of a knowledgeable and pleasant guide. There are lots of companies offering 2CV tours around the city for all different budgets and tastes. We spotted one zipping by as we walked through the city (with a view of the Grande Roue which for many years was Place de la Concorde and was back in the Tuileries Gardens for the summer). 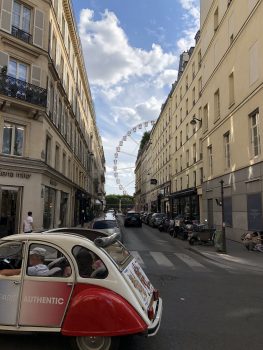 All photos courtesy of Tim Hildreth. Used with permission.