I realized recently that, while we’ve often evoked it, no one here at the Transparent Language French Blog has ever really talked about Le Petit Prince … perhaps one of the most famous (or if not, at least well-loved) books ever written in French. 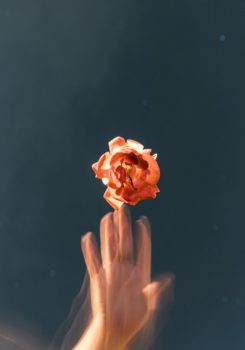 Often taught in high school French classes because it is relatively short and it is full of useful vocabulary, Le Petit Prince is also full of beautiful themes.

Like in Le Soldat Rose, a main theme of The Little Prince is the importance of keeping one’s childlike view of the world. Le petit prince tells us that “on ne voit bien qu’avec le cœur. L’essentiel est invisible pour les yeux” (one can only see well with the heart. What is essential is invisible to the eyes).

Si vous ne l’avez pas encore lu, vous devriez vraiment ! (If you’ve never read it, you really should). And if you have (already read it) there are more ways today to explore this magical tale than ever before.

In addition to the original illustrated novel, Le Petit Prince is available today en film, en comédie-musicale, et, bien qu’il soit difficile de procurer, en BD (as a film, as a musical, and while it might be difficult to get, as a comic).

Au théatre / At the theater

In the early 2000’s (2002 to be exact) Le Petit Prince was produced on stage at the Casino de Paris. Now available on YouTube, this lovely musical version adds a new dimension to the story through les chansons (songs) and la mise-en-scène.

Au cinéma / At the movies

A 2015 movie adaptation (disponible sur Netflix) adds a new dimension (perhaps a controversial one to some!) to the story by showing us what happens after the end of the original tale.

Originally published in the US, Le Petit Prince only appeared in France after Saint-Exupéry’s death following the liberation of France. It was only recently that I learned that Antoine de Saint-Exupéry wrote Le Petit Prince while living in New York during World War II. At the beginning of the war he flew reconnaissance missions for the French military, but after the 1940 armistice with Germany he went to New York where he worked to convince the United States to engage in the war … and wrote (and illustrated!) what would become his most successful novel.

Last week Bridgette shared a great post about camping in France. Now you can go glamping in France (and select locations in North America as well!) thanks Huttopia, a sort of fancy camping-cum-Club Med option for people who want to camp without the hassle!

Photo by Evie Shaffer from Pexels