French Music: “Si Tu Veux” by Mumford and Sons Posted by Elizabeth Schmermund on May 14, 2018 in Music

If you’re a diehard Mumford and Sons fan, you might be aware that they’ve released one song in French. “Si Tu Veux” is a collaboration between Mumford and Sons, the Senegalese singer Baaba Maal, the South African pop group Beatenberg, and the producer-vocalist The Very Best. It was released on their Johannesburg EP, which was recorded during the band’s tour in South Africa in 2016. 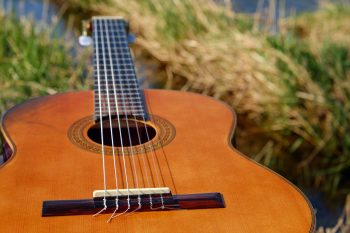 Baaba Maal is one of Senegal’s—and even Africa’s—most famous musicians. He sings primarily in Pulaar, a Fula language that you can hear on “Si Tu Veux.” However, as a Senegalese musician, he has also performed in French. You can listen to Baaba Maal talk about his album The Traveller (in French) below:

The lyrics for “Si Tu Veux” are simple, and are mixed with Pulaar. You can read them, and their English translation below:

Si Tu Veux
Si tu ne veux pas tu vas chez toi
Ou bien je vais chez moi
(If you don’t want to you can go to your place
or I’ll go to mine.)
Si tu veux tu viens chez moi
Ou bien on va chez toi
(You can come to my place if you’d like
Or we will go to mine.)
Si tu vas tu verras
Si tu vas tu verras
(If you come [to my place] you’ll see
If you come [to my place] you’ll see)
You can listen to “Si Tu Veux” below:
*Note how “ou bien” here means “or.” In French, “ou” typically means “or.” However, if you add “bien,” it reinforces a statement as being an exclusive choice. Using “ou bien” instead of “ou” in French therefore tells the listener that they can only pick one of the options provided.
*While not in French, Baaba Maal’s “Fulani Rock” has received nearly universal acclaim. In the liner notes for this song, which features on The Traveller, Maal writes: “Language is a weapon. I’m not using it to destroy but to build bridges and bring people together.”
Tags: Baaba Maal, French lyrics, French music, Mumford and Sons, Senegalese music