French Music – What happened to the shop girl? Posted by Tim Hildreth on May 15, 2018 in Culture, Grammar, Music, Vocabulary

Last week I introduced you to the French singer Bénabar, and through him, to la petite vendeuse. As I mentioned, Bénabar’s songs tell stories. And fortunately for us, sometimes those stories se retrouvent et se rejoignent (find each other and connect) in other songs. 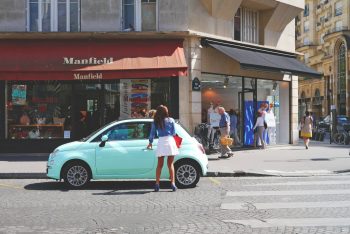 Reminder: YouTube allows you to slow down the playback of videos. If you click the settings button you can choose to play any video back at 3/4 or 1/2 (or even 1/4!) speed. It’s a handy way to build up your ability to understand at full speed.

* Talkie-walkie is the French term for what in English we call a walkie-talkie.  Va savoir pourquoi! (Who knows why!) According to this blog, it might come from a simple inversion / extension of the way French structures noun/adjective pairs (remember, the adjective generally comes after the noun it modifies as described in this post) but nothing is sure. Compare the following examples in French to their English:
un cheval de course (lit. a horse of race) = a race horse
un course de cheval (lit. a race of horse) = a horse race
** ‘kiffe’ (from the verb ‘kiffer’; slang imported from Arabic) means ‘something you love’, ‘to like, to love’.
*** What’s happening here? According to John, possessive adjectives are supposed to help us understand the genre of nouns in French. But if humeur were masculine (as the son would seem to indicate), then we would say “son humeur est joyeux“. The use of ‘joyeuse’  though tells us that ‘humeur’ is actually feminine. While you normally would find sa before a feminine noun, when that noun starts with a vowel or a silent h, as humeur does, then you need to use son (or mon/ton).

Pour en apprendre plus (to learn more about it)

One fun thing that attracted me to this album and these songs is that they produced a series of short videos featuring real people. You can hear from a real vendeuse here and un vrai vigile here.

Photo by Lum3n.com from Pexels (CC0).