After last week’s “trip” to ‘la Bretagne’, this week a few of my favorite things about Paris.

The town I lived in during my time in France, Bois-Colombes, is just a short 10-minute train ride from the Gare St. Lazare (the St. Lazare train station) in Paris’s 8th arrondissement. Easy access to public transportation meant that I could easily head into the city and explore on my own . . . and over the years, I took full advantage! I loved the subway (le Metro), but even more, I loved just heading out and walking around the beautiful city streets and discovering its wonders, large and small. Of course I visited all the major sites around Paris (the Louvre, the Eiffel Tower, l’Arch de Triomphe, le Musée d’Orsay, Notre-Dame, and all the other “must-sees”), but I was also able to discover many other less-well-known yet equally wonderful places to see.

Located in ‘le Marais’ district (so called because it was once swamp/marsh land), la Place des Vosges is one of the most charming squares in all of Paris . . . and tops my list of favorites. Originally built as a royal residence by Henry IV (and as an escape from the principal palace of the Louvre, lying as it did at the time outside the borders of the city), the Place today is a quiet spot in an otherwise busy city bordered by shops and cafés. It’s a short walk from the Hotel de Ville (Paris’s city hall), from the Centre Georges Pompidou (the contemporary art museum and library whose ultra-modern architecture makes it hard to miss!), and from another of my favorite spots in the city . . . 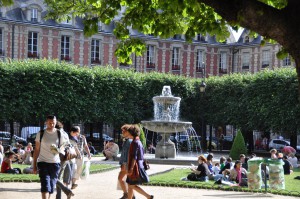 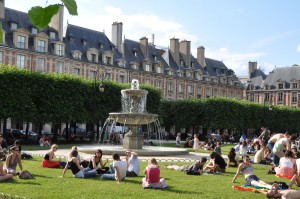 The Carnavalet Museum, located at number 16, rue des Francs-Bourgeois, is the official museum of Paris’s history from the city’s beginnings as “Lutetia” through the middle ages and into the 20th century. Housed in two former ‘hôtels particuliers’ (private mansions), the museum includes paintings, sculptures, historical displays, and other artifacts from throughout the history of Paris. It’s a wonderful place to go to get your grounding before exploring all the city has to offer.

Located a short walk from the Gare St. Lazare on the boulevard Haussman, le Printemps et les Galeries Lafayette are two of Paris’s premier department stores. They aren’t the only ‘grands magasins’ in Paris (you can also visit le BHV (Bazar de l’Hôtel-de-Ville / the “bazaar of city hall”) and Le Bon Marché . . . which despite its name is anything but inexpensive!), but for me, these are the crown jewels. Even if you don’t care about shopping, le Printemps et les Galleries each has a hidden ‘bonus’ worth the visit.

Head up to the rooftop café at Le Printemps for what is, in my mind, one of the best views of the city. Paris is famous for its roofs, and the panoramic terrace that wraps around the café on the 9th floor is at just the perfect height for enjoying breathtaking views of the Opera, the Madeleine church, the Sacré-Coeur, and the Place de la Concorde*.

Upstairs at les Galleries Lafayette you’ll find another great café, this one inside though. Despite the fact that this is an indoor establishment, the view is almost as amazing as next door at le Printemps. The Galleries Lafayette has a spectacular stained-glass dome and from “Vue sue Coupole” you can grab a quick bite and admire the amazing ceiling above.

French food is a world favorite for a reason and the list of amazing places to eat in Paris is endless. You can go as high end as you like . . . but you can also find delicious meals for a song if you know where to look. When ever I go to Paris , there are two places I always make sure to go for a meal. One is pure Paris, the other, pure tourist!

In one of the opening scenes of the movie “Julie and Julia” (a ‘must see’ for anyone who loves food and France), Julia Child’s husband Paul teaches her how to ask for a restaurant, ‘quelque chose typique et charmante’ (something typical and charming). They don’t end up at Le Coupe-Chou, but they could! Located in the Latin Quarter on one of the oldest streets of Paris, le Coupe-Chou is as typical and charming as they come. Comfortably seated in one of the low-ceilinged stone rooms, you can enjoy French classics like ‘foie-gras de canard avec chutney de fruits secs‘ (duck foie gras with dried fruit chutney); ‘escargots de Bourgogne en direct du producteur’ (Burgundy snails strait from the grower);
Confit de canard, haricots verts, et champignons de Paris (Duck confit with greens beans and mushrooms); Bourguignon à la joue de boeuf, pommes de terre, lardons, oignons et champignons de paris (Boeuf bourguignon with potatoes, bacon, onion and mushrooms); or Magret de canard du sud-ouest à l’orange, pommes dauphins (Duck breast with orange, potatoe pancakes). 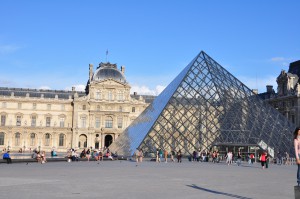 Come for the view, stay for the view! Le Café Marly is famous for it’s location. You can eat a perfectly good meal, but the food can be a bit over-priced . . . but that’s not why you’re here. Le Café Marly is located in a wing of the Louvre and if you’re lucky enough to score a terrace table, you can enjoy your lunch looking at the glass pyramid designed by I. M. Pei that now serves as the primary entrance to the museum. Shocking when it was first built, the pyramid is now one of the major draws in the city (and featured in professional and personal photos around the world).

* For my second favorite view of the city, head to . . . and up! . . . the Arc de Triomphe. Anyone who’s ever visited Paris is familiar with this landmark, but not everyone knows that there is a museum and a “roof deck” with a wonderful view of the Champs-Elysées, la Place de la Concorde, and over the roofs of the surrounding buildings. The Arc de Triomphe and le Printemps have a big advantage over the city’s other famous viewing platform (the Eiffel Tower) . . . you can’t see the Eiffel Tower from the Eiffel Tower! 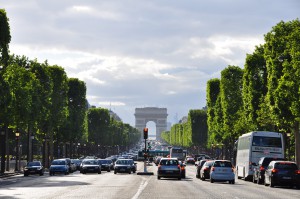