His Or Her Cup? – Confusing Possessive Adjectives In French Posted by John Bauer on Apr 11, 2018 in Grammar

Continuing from la semaine dernière (last week), understanding how le genre d’un mot (the gender of a word) affects la grammaire française (French grammar) can be hard to grasp for non-native speakers. Any tips that can help with internalizing why les genres are so important and just how they work makes learning la langue (the language) a little less painful. 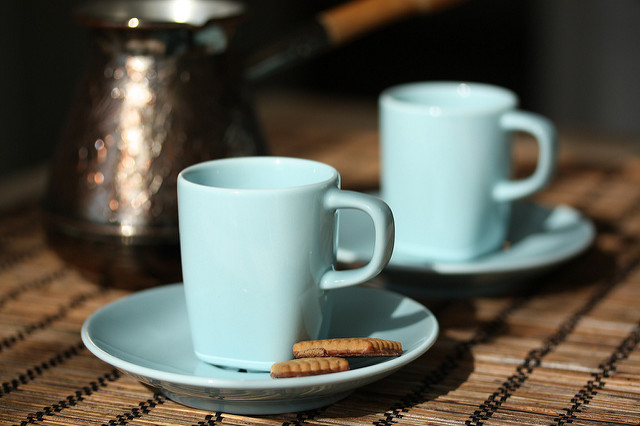 A small part of grammar where the concept of les genres exists both en français et en anglais is pronouns. For understanding how les genres work in French, a subset of pronouns, les adjectifs possessifs (possessive adjectives), are especially interesting, since they are gendered words that are attached to the noun in both English and French.

There is a tricky difference hiding in these small words and knowing about it can help les anglophones (English speakers) avoid making mistakes en français. It has to do with how les adjectifs possessifs treat the grammatical idea of un genre very differently.

In both languages les adjectifs possessifs have to agree with le genre d’un mot:

However, with an example it’s easy to see how in French l’adjectif possessif agrees with the attached noun, but not in English.

En anglais, the possessive adjective agrees with who actually possesses the noun. That makes it impossible to properly translate “son tasse“ without more context.

This difference gets even more complicated when talking about people:

La version française (the French version) agrees with the attached noun again, but this time also gives us information about le genre du patron (the gender of the boss). On the other hand, la version anglaise gives us information about who possesses the noun or in this case about le genre de l’employé (the gender of the employee).

Combining all these complicated rules is hard to understand, so let’s break it down further:

En français, les adjectifs possessifs always agree with the noun that follows, but in English, the possessive adjective always agrees with who possesses the noun.

Keeping these rules in mind is a step towards mastering la langue and more importantly will help you not confuse les francophones (French speakers) by using the wrong word!

If you are still confused, ce qui est important (what’s important) is knowing that you cannot think in English and use les adjectifs possessifs in French like you would en anglais. Don’t worry, with practice la grammaire will become clear.