You may or may not have heard about the Académie Française (French Academy). Essentially, it is a council that handles all matters of the French language, and has been in existence since 1635, having been suspended for 10 years during the French Revolution in 1793. It is made up of 40 members known as les immortels (the immortals) who hold office for life. They protect and preserve the language and offer an official guide on vocabulary and grammar. Essentially they work hard to keep French, French!

Some famous French writers who have been members include; Voltaire, Victor Hugo, Alexandre Dumas, and Marguerite Yourcenar- having been the first female appointed in 1980.

The official uniform is seen below, and is called l’habit vert, green clothing. They also carry une épée, a sword. Apparently the cost for the uniform is around $50,000, which members must pay themselves. As you can imagine, it is quite a coveted honor to be included in the academy. Many famous French writers were never included, either because they never were candidates or there were no seats available at the time given that members are for life. Some of which include; Charles Baudelaire, Gustave Flaubert, Molière, Jean-Jacques Rousseau, and Jean-Paul Sartre. 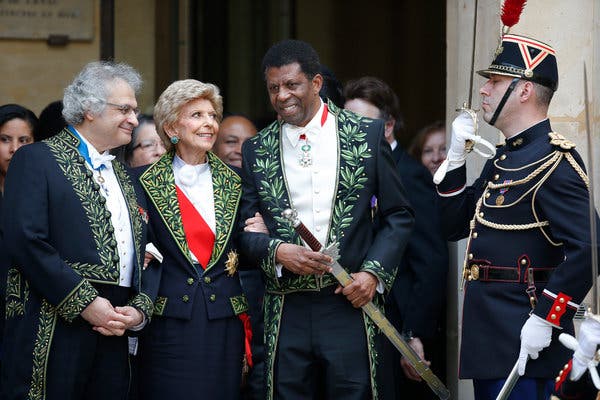 Often the Académie Française has to make decisions about new words and concepts entering our modern world. One of which that has lately been under discussion is COVID-19 – should it take a masculine article, or a feminine one? They have finally spoken out, and the decision that has been made is… feminine! It is la COVID-19.

How did the Académie Française arrive to this conclusion? For months people have been referring to it as le COVID-19, attributing a masculine article to the disease mistakenly, most likely because the virus itself is masculine (le coronavirus).

The academy further explained that COVID was an acronym for coronavirus disease, or maladie provoquée par le coronavirus, and that in French you need to look to the core word in an acronym to determine its gender. In this case, disease, which is a feminine la maladie.

Other examples are la CIA and le FBI. La CIA because agence (agency) is a feminine word in French. Le FBI because bureau is a masculine word. Interessant, n’est-ce pas?

When I learned about French genders with foreign words in particular, I was told in a blanket statement to always use the masculine article. Therefore, I would have instinctively used le with COVID-19, CIA, and FBI.  It is obviously a bit more complicated that that, so thankfully we have the Académie Française to decide and inform the public as to the correct usage.