French Vocabulary – In the street Posted by Tim Hildreth on Jun 2, 2020 in Music, Vocabulary

The other day I was out for a walk and practicing my French en même temps (at the same time) by naming all the things I could  see. Les arbres, les plantes, le ciel, le soleil, des boîtes aux lettres, et la rue (The trees, the plants, the sky, the sun, mailboxes, and the street). When I got to la rue I wondered … 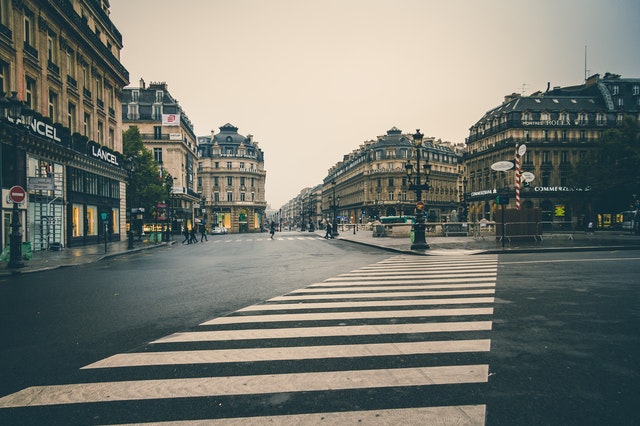 De nos jours (Nowadays, lit. Of our days) these words are often used interchangeably. But they historically have distinct meanings1and just to be clear, where I live, they are definitely rues.

Une rue is generally smaller, usually narrower and has few if any side streets. Rue is also the most generic term for street.

Une avenue is a large urban voie (way), often bordered by trees (like the Avenue des Champs-Elysées) and leading somewhere of importance, like a monument, that often gives the avenue its name … comme l’avenue de l’Opéra à Paris (like the Avenue of the Opera in Paris).

Un boulevard was traditionally a road that ran along the fortifications of a city or was laid over the foundations/former placement of such fortifications. As such boulevards were often circular (like the boulevard Périphérique), though over time this changed.

En voilà du nouveau … / Here’s a new one … As France begins opening up, some are taking their pent up demand to les rues in the form of an updated version of the classic French apéro …  l’apérue! 😉

Here’s a little song to help you remember at least one of these words … and learn some other useful words for things you might find dans la rue.

La chaussée – the pavement, the roadway (as opposed to le trottoir which is for people2though originally it was the place for horses!, la chaussée3which we find in the term rez-de-chaussée / ground floor is the part of the road for cars and other traffic)

Photo by Margerretta from Pexels