It’s been said that le petit-déjeuner (breakfast) is the most important meal of the day. You can get all the essential nutrition and energy to help you get through your day (or you can look at it that you can stuff your face with meats and starches and fats and work it off pendant la journée [during the day]). My home country of the USA certainly isn’t known for its healthy eating: even for breakfast, we have our heavy, greasy foods and sugary cereals. I always was under the impression that the French ate pretty healthy — and they do despite the heavy cream sauces and butter. They know something we haven’t mastered: portion control. 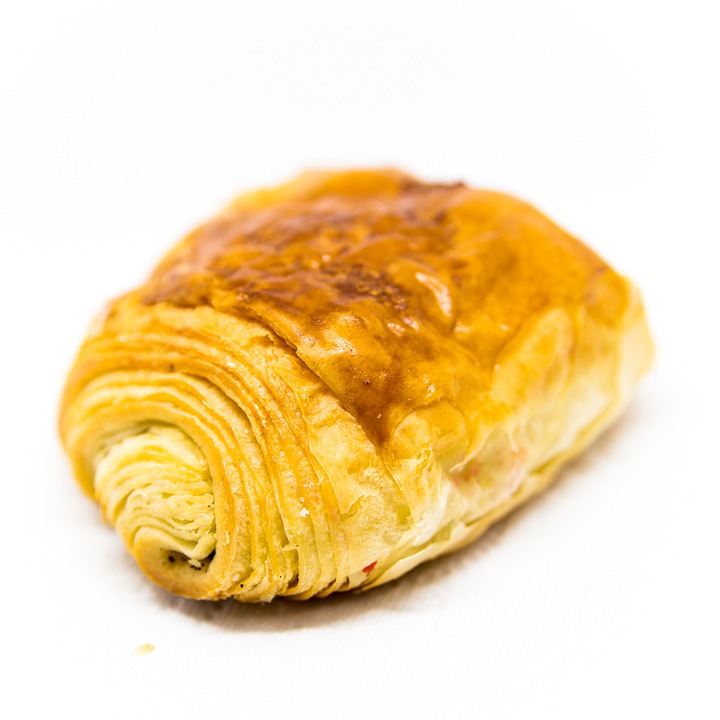 Needless to say, I was surprised and intrigued to learn of this delicious flaky pastry called un pain au chocolat. If you’ve never had one, allow me to open your eyes to this little pastry puff of a miracle. Un pain au chocolat is a kind of viennoiserie (literally – ‘a thing from Vienna,’ but in baking, it’s a kind of baked good made from a yeasty dough that is the same as the dough for a croissant) that has 2 bars of dark chocolate baked inside. This puff pastry method, despite its being a “thing from Vienna,” is actually a French baking method. Viennese baked goods become popular in France in the mid-1800s  when a Viennese Bakery was opened in Paris. The baking method was changed a bit, and it became the style we know today.

So, this deliciousness can be enjoyed in the morning by both children and adults alike. It’s very easy to get used to a French breakfast! Adults generally enjoy theirs with une tasse de café (a cup of coffee), and the kids drink theirs with jus d’orange (orange juice). Sign me up! Franchement, même si je suis un adulte, je préférerais le jus! Je n’aime pas le café (Frankly, even though I’m an adult, I would prefer the juice. I don’t like coffee).

This chocolate croissant, as it’s often referred to in English, is generally served as breakfast or a snack. À mon avis (in my opinion), they are best served warm. In almost any city in France, you can go to la boulangerie (bakery) and buy one. Unlike other complicated pastries, this one is generally pretty cheap and can be purchased for moins d’un euro (for less than a euro). Sometimes, la boulangerie will have une promotion (a deal/special offer). At the bakery I would frequent, there was a 3 acheté, 1 offert (buy 3 get 1 free) deal for a cheap price. Il faut en profiter (you have to take advantage of that)!

Even though you can find it all over France, you might not always find it under the name pain au chocolat. Much like the soda vs. pop debate in the USA, France has the same linguistic war with this pastry. In southwestern France, this dessert is generally called une chocolatine. Pourquoi la différence (why the difference)? I’ve found two differing reasons: 1) Supposedly during the occupation of Aquitaine, the English were naturally fond of this treat and would ask the locals for a “chocolate-in bread.” Over time, “chocolate-in” came to be pronounced chocolatine. 2) Another theory is that the that word derives from the term chicolatina in Occitan and is still used today.

Vous êtes français? Allez voter! (Are you French? Go vote!)  Which do you say where you’re from? You can check this link to see what real French people have to say about the ‘proper’ term.

If you can’t make it to Europe to try one for yourself, you can always check out a recipe on YouTube and try to make them for yourself. If there’s a Starbucks around you, you can find un pain au chocolat in their glass case, but I assure you that it’s not quite the same. Most big cities have a French bakery – take a peek on Google and see what you can find in your area.

No matter what you call these things, they’re delicious and can’t be missed.