♪ Sur le pont d’Avignon, on y danse, on y danse, sur le pont d’Avignon, on y danse tous en rond. ♪ Even before I started learning French in high school, I’d heard this song when I was younger because my mom would sing it to me and my sister. Just like Frère Jacques and Alouette, it’s a pretty common song for children in the US, even if you have no idea what you’re singing. But the song about dancing on Avignon’s bridge has a fun story as its background. Read below to learn the legend of Saint Bénézet and his role in the construction of this landmark, how the famous song came to be, and how French scientists have recently “rebuilt” the bridge (well, in 3D). 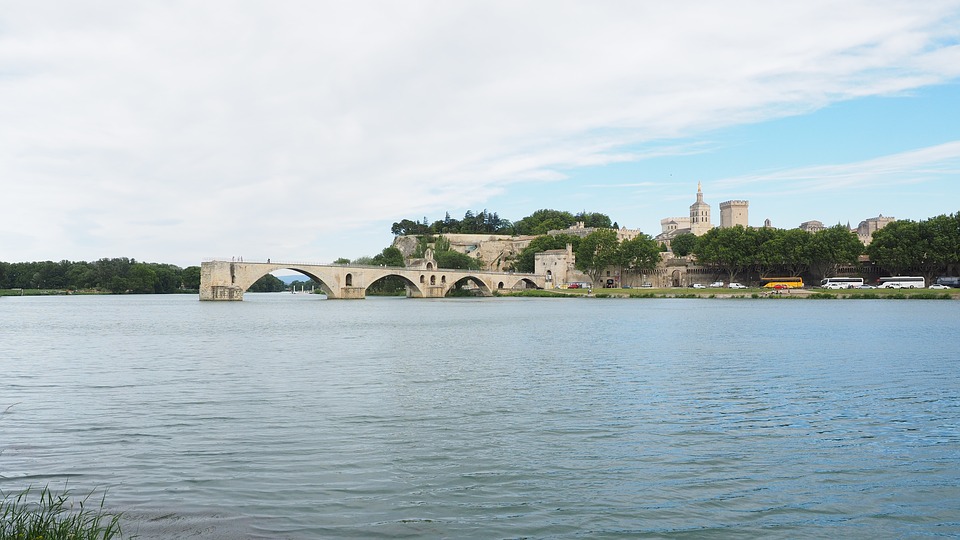 Avignon is a southern French city located in the Provence-Alpes-Côte d’Azur region. Just outside the city’s famous walls is the Rhone River, and on the other side of it is the city of Villeneuve-lès-Avignon.  Between 1177 and 1185, a bridge was constructed to connect these two cities. Malheureusement, ce pont a été détruit 40 ans après pendant la Croisade des Albigeois (Unfortunately, this bridge was destroyed 40 years later during the Albigensian Crusade). The bridge was later rebuilt, this time with 22 arches. Avignon is prone to being flooded; even just a few months ago, the streets were completely covered in water. These floods now are less catastrophic than before, and this is thanks to le barrage de retenue (dam) that was put into place in the 19th century. Before this, though, because of the flooding, many of the bridge’s arches would collapse into the Rhone. Instead of investing more money and time (or just building a dam), the bridge’s reconstruction was abandoned. Of the original 22 arches, only 4 are left standing today. The “bridge” as we know it now appears to be more a pier than anything.

In 1177, un jeune berger (a young shepherd) by the name of Bénézet made his way down the mountains from a city in the Ardèche department, some 150km (93 miles) away from Avignon. Claiming to have heard la voix de Dieu (God’s voice) — although some versions say Jesus instead — he was instructed to go to Avignon to convince its citizens to build a bridge. « Bénézet, prend ta houlette et descends jusqu’en Avignon, la capitale du bord de l’eau. Tu parleras aux habitants et leur dirais qu’il faut construire un pont » (Bénézet, take your rod and go down to Avignon, the capital of the waterfront. You will speak to the people and tell them they have to build a bridge.). Bénézet obeyed and made his trip to Avignon. His request to the bishop was, of course, met with ridicule and laughter. Why would God speak to him and tell them to build a bridge of all things? In fact, the bishop was so angry, he was tempted to have Bénézet’s hands cut off for telling such a blasphemous lie. To prove his word, il fallait se mettre au défi (he had to be put to the test) by the bishop to toss an enormous rock into the river. It wasn’t just any rock… No, this was a rock so heavy that not even three dozen strong men could make it budge. With incredible strength, Bénézet hoisted the huge boulder on his shoulder and threw it into the river. Il a été aidé par une intervention divine, on dit (They say he was helped by a divine intervention). Now that everyone was thoroughly convinced, construction could begin. The boulder he threw was used as initial support for the first arch. Bénézet was given 300 pieces of silver by the bishop to start the project, and les Avignonnais (the citizens of Avignon) were happy to help with the divine bridge!

After Bénézet’s death, he was interred in the bridge’s chapel. That’s right – the bridge has its own chapel called The Saint Nicolas Chapel. Once the bridge was abandoned in 1670, Saint Bénézet’s relics were moved from the chapel to the Hôpital du Pont, which is found inside the city walls and next to the gatehouse.

So there’s the story of the origins of the bridge, but what about that catchy song? Its earliest form was written by  Renaissance composer Pierre Certon and dates back to the 16th century. His version sounds nothing like the version we know now, and was actually used as part of a mass. Check out a snippet below.

The version we know today is thanks to a mid-19th century composer named Adolphe Adam, who is perhaps best known for composing le Cantique de Noël. He included the reworked composition in his 1853 operetta Le sourd, ou l’auberge pleine, but it wasn’t until 1876 when the song became internationally known through another operetta that changed the title from Sous le pont d’Avignon to what’s known today: Sur le pont d’Avignon. Despite the preposition change, its original name was a better fit. The bridge was built for donkeys and horses to cross, so it wasn’t wide enough to danser tous en rond as the song would like us to imagine. The bridge originally passed over parts of present day L’île de la Barthelasse (Barthelasse Island). Under some of the arches were cafés and picnics, and people would enjoy themselves there and dance. So there was indeed dancing, but it was sous (under) and not sur (on) the bridge!

The original composition by Certon

The song as we know it today

In November of 2014, « D’une rive à l’autre, un pont entre réel et virtuel, entre mythe et réalité » (From one side to the other, a bridge between real and virtual, between myth and reality”), a time traveling video showing what the bridge would have looked like in its entirety from one side to the other in a spring day in 1550 before it was destroyed, was released. This project required a lot of time and effort, but it’s nice to have a glimpse of history. For 4 years, 4 separate laboratories researched, drilled, and even took ultra sounds – and it only cost 2.4 million euros. Very interesting video to watch.