The Little Prince in Paris Posted by Tim Hildreth on Feb 22, 2022 in Culture, Literature, Sports, Vocabulary

If you’re a long-time follower, you already know that one of France’s most famous contributions to the world of literature was not actually written in France. Now for the first time, the manuscript of Antoine de Saint-Exupéry’s Le Petit Prince is making a trip to Paris. 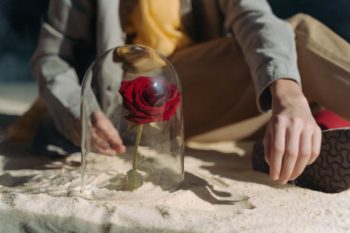 Photo CC0 from cottonbro at www.pexels.com

Written and first published in New York City, the handwritten and hand drawn pages that would become Le Petit Prince are part of the permanent collection at the Morgan Library and have never left New York until now. For their voyage vers la France1trip to France, the pages of the manuscript – which will be on display at the Musée des arts décoratifs de Paris, jusqu’au 26 juin2Museum of decorative arts in Paris through June 26 – where accompanied by Saint-Exupery’s arrière-petit-neveu3great great nephew on un vol d’Air France (bien sur!)4an Air France flight (of course!) flown by a pilot qui se dit inspire de deviner pilote par Saint-Exupery5who says he was inspired by Saint-Exupery to become a pilot.

Watch a video about their trip from FranceInfo here.

For some, Le Petit Prince is the “livre qui [leur] a donné envie d’apprendre à lire quand [elles étaient petites]”6the book that made them want to learn to read when they were small. This book – written by “un rêveur”7A dreamer – est toujours d’actualité8is till relevant for it’s many fans.

You can view a summary of the results here or dig into details of all the medals across all the competitions here. The first link, with its summarized table to results by country, is a good place to review the country names in French. The detailed results in the second link will give you lots of examples of the different names of winter sports in French.

If you need a little review first, check out the post below.

A few weeks ago I introduced the term pantouflard which comes from the word pantoufle. It got me thinking about another kind of slipper that we keep around our house. We have a basket of pichous that we keep by the door in the winter for guest to wear after they take of their shoes. These knit woolen chaussons (another word for slippers) are a staple of many Quebecois homes. The original pichous were a type of moccasin common among the native populations and are named for an Amérindiens word for lynx. Ours were made by my partners grand-mère11grandmother

And I’m not quite sure when or why, but it struck me recently that small French grocery stores are called épiceries because they are descended from moyenâgeux12of the Middle Ages sellers of épices13spices. Today they sell so much more, but you can still find du sel, du poivre, et d’autres épices at your local épicerie.