Travel in France: A Palace Made of Pebbles? Posted by Elizabeth Schmermund on Mar 26, 2018 in Culture

There are lots of famous sites in France, from the iconic French Riviera to the Eiffel Tower and the Louvre. But there are also some interesting attractions off the beaten path … like a gigantic palace made almost entirely of pebbles in Hauterives, France. 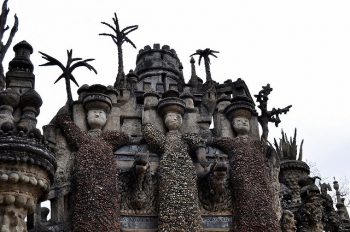 Courtesy of Frédérique Voisin-Demery at Flickr.com (CC BY 2.0)

Known as Le Palais idéal, or the Ideal Palace, this strange structure was built over thirty-three years by a postman named Ferdinand Cheval. According to legend, Cheval stumbled upon a perfect pebble in his backyard one day, at the age of forty-three in 1879. This discovery led him to start building a fountain, called La Source de la vie (The Source of Life), made out of seashells, pebbles, and lime mortar. It took him two years to complete this fountain, but he didn’t stop there. Soon he began another project: a cave made of pebbles that he consecrated La Grotte de Saint-Amédée (Saint Amadeus’s Cave), after the patron saint of Hauterives.

Cheval’s ambition was not assuaged by these projects, and he continued on to build le Tombeau Egyptien (Egyptian Tomb), which he planned to be his final resting place.

Cheval continued to construct his palace over the next decades. Using a wheel barrow he would bring with him on his postal rounds, he would collect pebbles, haul them to his backyard, and continue building when he was home from work. Eventually, he built multiple facades of the palace, with multiple temples, a tower, and a mosque. Cheval was influenced by French culture’s fascination with Eastern cultures at the time, constructing a Hindu temple and modeling statues after Eastern art. At the entrance to the mosque, he inscribed above the door: Les fées de l’Orient viennent fraterniser avec l’Occident (The fairies of the East come to fraternize with the West). And, above the main entrance, he inscribed the extent of his work: “1879-1912 : 10 000 Journées, 93 000 Heures, 33 ans d’épreuves” (1879-1912: 10,000 Days, 93,000 Hours, 33 Years of Ordeals).

Eventually, the Ideal Palace drew visitors from far and wide, and it was declared a historical monument in 1969 by the French artist André Malraux. The wheelbarrow that Cheval had used to collect these millions of pebbles sits in a place of honor inside the palace. Unfortunately, Cheval did not get his wish to be buried in the Ideal Palace, as it is illegal in France to be buried outside of cemeteries. So Cheval constructed his own mausoleum in the Hauterives cemetery, where he was buried when he died a year after its completion.

You can find out more about Le Palais Idéal—and how you can visit it—by visiting its official website here.