At A Petrol Station: German Vocab Posted by Constanze on Jun 23, 2017 in Language

Guten Tag! Inspired by this post on the Greek blog, I thought it would be handy to look at German vocabulary related to petrol stations and driving – as this is something practical, important, and which you will use in day-to-day life in Germany.

This is the German road sign for a petrol station:

Some of the petrol station names to look out for in Germany are: Aral, Shell, Total, Esso, Avia, Jet and Agip, to name a few. 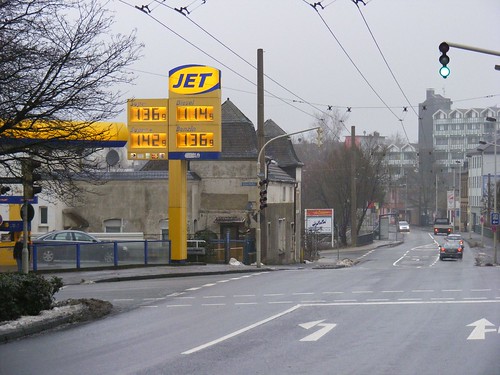 JET Tankstelle. Photo by sludgeulper on flickr.com under a CC license (CC BY-SA 2.0)

Obviously, the main word to look out for is die Tankstelle – petrol station.

The Germans have a verb for the act of filling up your car with petrol: tanken. Whereas in English we’d have to say the equivalent of ‘Ich brauche Benzin’ (‘I need to get petrol/gas’) or ‘Ich muss zur Tankstelle’ (‘I need to go to the petrol station’), in German you can simply say Ich muss tanken. This comes from the English word tank. ‘I need to tank’. I’m not joking when I say that this verb has amused me since childhood – probably because I recognised the mixture of German and English and found it wonderfully simple!

When you head to the Tankstelle to do some tanken, be sure to know which type of fuel to put into your Auto (car):

You may also see Benzin described as Bleifrei – unleaded, or as one of the following: Normal, Super, Super Plus. 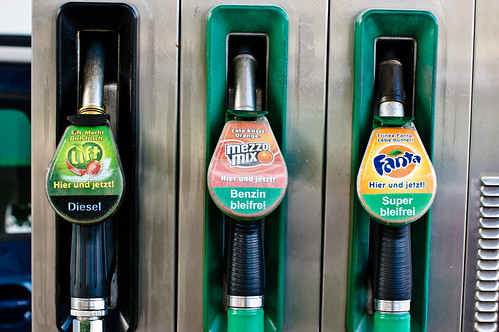 If you’re renting a car (which you’d do from a place called die Autovermietung, or das Mietwagenbüro – car rental place) and you’re unsure of the exact fuel type your car needs, be sure to ask – or even get them to write it down for you (this information is probably written down somewhere anyway, but just in case you are unsure, you could always ask for clarification):

Welchen Kraftstoff braucht das Auto? – Which fuel type does the car use?

Würden Sie das bitte für mich aufschreiben? – Would you write that down for me, please?

Better to be safe than sorry.

At the Tankstelle, use die Pumpe (the pump) to fill your car up, firmly close der Tankdeckel (petrol cap cover), note which number Säule (pillar) you are at, then go and tell the cashier so you can pay for your fuel. ‘Nummer vier, bitte’ – ‘Number four, please’.

While at a petrol station, you may also want to do the following things:

If you’ve driven in Germany before, what was your experience like? Was there anything ungewöhnlich (unusual) about the petrol stations you visited, or was it all very straight-forward? Let us know in the comments!