Election Day in Germany Posted by Larissa on Sep 28, 2021 in Culture, Language

Last Sunday, the 26th of September, was a very big day in Germany. There were three elections and one referendum. When there are these many elections it is called a Superwahljahr (this literally translates to a super-vote-year), which is a whole extra post that you can find here.

There was the election for the Berlin Abgeordnetenhaus (the state parliament of Berlin), the  Bezirksverordnetenversammlungen (district council) and the biggest election was the Bundestagwahl (federal election), as Angela Merkel was not running in it for the first time in 16 years. 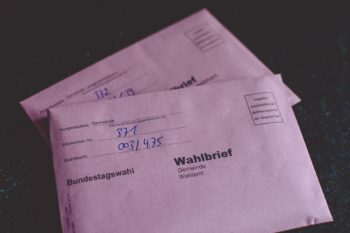 Photo from markusspiske on Pixabay.

How did people vote?

German citizens had time on Sunday, the 26th of September to vote between 8am and 6pm. However last Sunday some polling stations were allowed to stay open slightly longer than 6pm, because there were some organizational faults that delayed the voting. Polling stations in Berlin ran out of Wahlscheine (ballot papers) and others were given the wrong ones. It didn’t help that there happened to be a marathon in Berlin on Sunday, which meant a lot of roads were closed, delaying the deliveries of die Wahlscheine.

Armin Laschet from the CDU was also on the news for voting because he managed to fold his Wahschein incorrectly, showing who he voted for. Usually if you fold your ballot paper the wrong way they give you a new one to redo it, however as the ballot paper had already been put into the box they couldn’t take it out again, and as Mr. Laschet voted for his own party they couldn’t see how the mistake could influence the election in any way.

Who is the new Bundeskanzler/in (chancellor)?

The SPD (Social Democrats) have taken the lead with 25.7%, with the CDU (Christian Democrats) narrowly behind them with 24.1%. The Greens have 14.8 percent and the FDP (Free Democrats) have 11.5%. This means a coalition will be formed but it is still undecided which parties will be in it. As the SPD have the most votes, it would be likely that Olaf Scholz from the SPD would step up to be the new chancellor, however Armin Laschet from the CDU has already said that he still wants to be chancellor.

Have you been following the election in Germany?

Let me know in the comments below!