Germany’s Strongest Man Posted by Constanze on Apr 8, 2017 in Language

Guten Tag! Ich hoffe, es geht euch gut. 🙂 Every so often I think it’d be nice to talk about some (less obvious) famous Germans and their achievements. Today I’d like to introduce you to someone known as Germany’s Strongest Man – der stärkste Mann Deutschlands. Meet Patrik Baboumian. 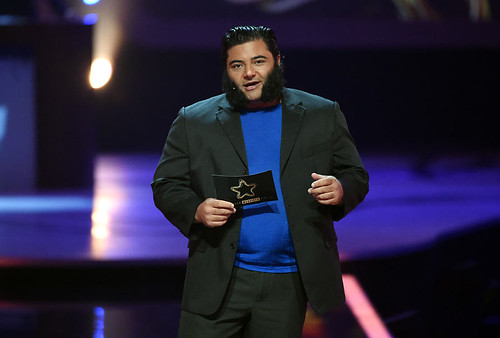 Patrik Baboumian verkündet den Gewinner in der Kategorie “Sports”. Foto by webvideotage on flickr.com under a CC licence (CC BY 2.0)

Patrik Baboumian was born in der Iran (Iran) to armenischen Eltern (Armenian parents), and moved to Deutschland (Germany) at the age of 7. He developed an interest in Kraftsport (strength training) as a teenager. In 1998, aged 19, he took part in his first bodybuilding Wettbewerb (competition), and went on to win several titles over the years. In 2006 he took part in his first ‘Strongman’ Meisterschaft (championship). In 2011 he gained the title Stärkster Mann Deutschlands (Germany’s Strongest Man). He can lift 215kg in Bankdrücken (bench press), 310kg in Kniebeuge (squat), and 360kg in Kreuzheben (deadlift). Following his 2011 victory he went on to win the Weltrekord (world record) in several ‘strongman’ competitions including the yoke-walk, where he carried 555 kg across 10 metres. He then beat his own record by increasing that amount to 560 kg! This is the heaviest yoke-walk ever done!

Although other athletes have gone on to win the title of Stärkster Mann Deutschlands, Patrik is especially well-known for being the first Veganer (vegan) to hold that title. In 2011 he became the new face of a PETA campaign. The poster shows him with the title ‘Pflanzen Fresser’ (‘plant-eater’, or ‘plant-muncher’). He is often praised for disproving the theory that athletes need to eat Fleisch (meat) to be strong.

Patrik has a YouTube channel which is mostly in English, but there are some videos of him speaking German, such as this one, where you can hear him speak and see him in action!

I hope you enjoyed learning about the ‘German strongman’! Let me know if you are into Krafttraining yourself, and how much Gewicht you can lift! 😉 I’ll leave you with some related vocabulary: