Movies in German! Posted by Sten on May 26, 2015 in Culture, Language, Television

When I grew up, I got used to movies in cinemas and TV dubbed in German. Every character in a show or movie has their own voice. I never disliked it, as I grew up not knowing English, and having movies in German is then quite convenient. The other option, as in for example the Netherlands, is to subtitle movies, and leave the audio in the original language. Though when I was very young, those subtitles went a bit too fast for me. It is something to get used to, and often seen as one of the reasons why the Dutch speak such good English.

To me, the German dubs always looked quite real. The movie titles are also always translated, and sometimes not literally. For example, the movie Identity Thief is called Voll Abgezockt (Completely Ripped Off).

When I went on exchange to the USA, this all changed. I enjoyed one year of American life, and also American TV and movies (of course, just in English, without subtitles). I got used to them, and noticed how much realer a movie becomes when the language fits the actual setting. I always found it weird that American roads, buildings, people, surroundings and especially cultural things had a sudden German touch to it because of dubbing. When I returned home, I could not watch a German dubbed movie anymore. Suddenly, I saw how fake it looked, how badly synchronized it was… And mostly, the same voices represent different people in different movies and shows. For example, Manfred Lehman is responsible for the voice overs of Bruce Willis. You can listen to some of his samples here.

And this is an example of how this then sounds like:

The main problem for me is that the movies lose a lot of sense. Of course, subtitles could not make up for this well, but still. The original language can make up a lot for that gap. As an example, in the above video, Bruce Willis talks about a baseball card (Baseballkarte). In German, that does not make any sense, “baseball card” is not really a thing in Germany. This is the same with many puns, expressions and other cultural things that just don’t “flow” that well in German.

Of course, watching movies in German, whatever the original language, will help you learn the language better! Though I would refer you to good German movies, like Türkisch für Anfänger, Lola Rennt, Die Welle or Goodbye Lenin! But just be aware of the difference between movies from different cultures! 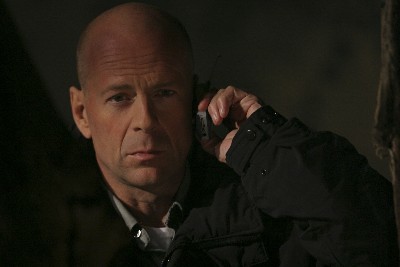 Could you imagine him speaking German? (Image by Geoffrey Chandler at Flickr.com under CC BY 2.0)

What do you think about dubbing foreign language videos?

Do you prefer subtitles?

How is it in your country?