Guten Tag, and wilkommen to another post on untranslatable German words!

The word of today is Die Waldeinsamkeit.

What is the meaning of Waldeinsamkeit?
It refers to a very specific feeling – the feeling of being alone in the woods.

How would you use it in a sentence?
Although it describes a feeling, it is often used in speech as if it were a physical place. For instance:
„Ich floh in die grüne Waldeinsamkeit“
„I fled into the green Waldeinsamkeit“

What is the nearest English equivalent?
Words like solitude, meditation, and contemplation are often used, as is the phrase ‘being at one with the universe’. However, it is so specific that it is difficult to find an English equivalent.

**
This word is one of the more ‘common’ untranslatable German words, so you may have heard of it already.

The concept of Waldeinsamkeit might seem scary or unsettling (the idea of being alone in the woods), but it is definitely a positive thing; it suggests a calm, contemplative atmosphere amidst a beautiful setting. If you’ve ever taken a solitary stroll through a forest and felt better for it, then you’ll understand. This painting by Ludwig Richter evokes the feeling of Waldeinsamkeit quite well (even though the girl in it has some woodland friends to keep her company!):

Waldeinsamkeit refers to having a connection with nature, and enjoying time alone amongst it. It is no surprise, then, that the Germans have this word, if their forests are anything to go by.

Perhaps the best known German forest is the Schwarzwald (Black Forest) in Baden-Württemberg, which was also the setting for many Brothers Grimm fairy tales. When you think about it, a lot of fairy tales are set in forests – Hansel und Gretel (Hansel and Gretel), Rumpelstilzchen (Rumpelstiltskin), Schneewittchen (Snow White), and Rotkäppchen (Little Red Riding Hood), to name a few! If anyone has experienced Waldeinsamkeit, it’s surely the characters in those fairy tales (at least, before things started to go wrong for them…). 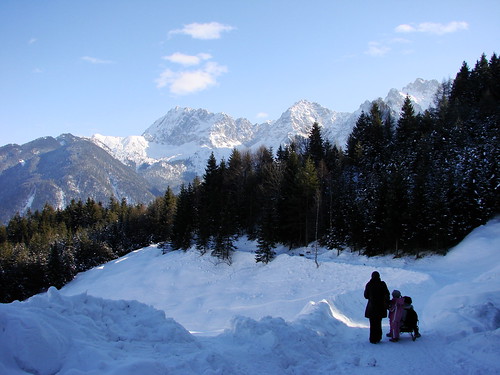 Waldeinsamkeit in the winter. Photo by wm_archiv on Flickr.com under CC BY 2.0

Closer to home for me is the Bayerischer Wald (Bavarian Forest), which borders (and continues into) the Czech Republic. A lot of my childhood memories of Germany involve the Bayerischer Wald. It is a part of life over there to go for long walks in the forest, or to ski through it in the winter. If I lived near the Bayerischer Wald, you bet I’d go for a walk through it to clear my head. There would be nothing more therapeutic than that.

Mushroom picking. Photo by marcinchady on Flickr.com under CC BY 2.0

Mushroom picking (Schwammal suchen – in which ‘Schwammal’ is Bavarian for ‘Pilze’ – mushrooms) in the forest is a popular pastime in rural Bavaria. It is customary to pick mushrooms in the forest, take them home, and cook dinner with them. I used to do this with my family when I was young.

There are even some real-life fairytale castles that exist in the heart of the German forests. The best-known of these is probably King Ludwig II’s Schloss Neuschwanstein, located in Hohenschwangau, Bavaria. This castle is often nicknamed “The fairytale castle”, and for good reason:

Yes, the woods and forests of Germany are certainly magical, mysterious, special places. It is easy to feel alone in them, and to get lost in your own thoughts as you stroll through them. Perhaps that is why the Germans have the word Waldeinsamkeit; they know, more than anyone, what it is to be alone in the woods – and how rejuvenating it can be.