The Story of Lysistrata Posted by Ourania on Mar 8, 2022 in Culture, Film & Theatre

Today in Greece we celebrate την Ημέρα της Γυναίκας (International Women’s Day ). However, the general mood is not festive, as the present war creates an atmosphere of uncertainty and fear. This is probably the right time to talk about της ιστορία της Λυσιστράτης (the story of Lysistrata). 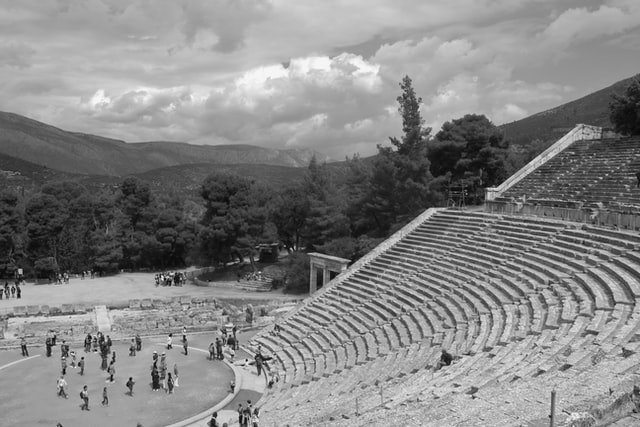 Photo by Uta Scholl on Unsplash

Aristophanes was the most important κωμικός ποιητής (comedy writer) στην Αρχαία Ελλάδα. He was born in Athens, around 446 BC, at the time when the construction of Παρθενώνας (the Parthenon) began, in the area which is known today as Πλάκα (Plaka). Είχε αριστοκρατική καταγωγή (he was an aristocrat, literally: he was of aristocratic origin) , criticized the Democrats and defended ειρήνη (peace). He was interested in the prosperity of the Athenians and in his comedies he refers to the economic and social problems that afflicted Athens at that time. O Πλάτωνας τον εκτιμούσε πολύ (Plato had a very high opinion of him). He wrote over forty comedies, eleven of which survive. Nine of them were written during the Πελοποννησιακό Πόλεμο (Peloponnesian War) (431-404 BC).

One of his most famous works is Λυσιστράτη (Lysistrata) which was written around 411 BC. The play takes place in ancient Athens during the Peloponnesian War. Lysistrata secretly persuaded the women in Athens and also women from other cities, to practice σεξουαλική αποχή (sexual abstinence) in order to punish their husbands who started the war . The women did not agree but after the Spartan Λαμπιτώ (Lampito) was convinced, έβαλαν το σχέδιό τους σε εφαρμογή (they followed their plan). First, they occupied Ακρόπολη (Acropolis) and then they started the abstinence. The men attacked the women but did not succeed to end the abstinence. Finally, with the help of a young and pretty woman, named Διαλλαγή (Reconciliation), the war came to an end and the women organized ένα συμπόσιο (banquet). This comedy is not only about peace but also about the conjugal love.

The elements of παρωδία (parody) και σάτιρα (satire) are present in all Aristophanes’ comedies. Sometimes, they are expressed in υπερβολικό τρόπο (extravagant way) and some others in a restrained way but through these elements το κοινό επικοινωνεί με τους ηθοποιούς (the audience communicate with the actors).

Unfortunately, we don’t know what the aftermath of the “modern” war will be. Let’s hope that it will end soon.

If you are interested in Ancient Greece, you can read about the Parthenon here. You can also check this and this.