Get Ready for Passover: the Seder Plate Posted by Ayana on Mar 26, 2018 in Uncategorized

Passover Seder (לֵיל הַסֵּדֶר) will be celebrated this year at the end of March. On the evening of Friday, March 30, 2018, Jewish families from all over the world will gather around their large family table to observe the Jewish exodus from Egypt. Food and wine will be generously served, and the traditional Seder plate (קְעָרַת פֶּסַח) will be placed in the center.

קְעָרַת פֶּסַח has an important place on the table during the big dinner of Passover eve. The Seder plate is a special plate, designed and decorated specifically for this annual purpose. If you don’t have a designed plate don’t worry, any other big plate will do.

The Seder plate is composed of six edible items that each have symbolic meaning: 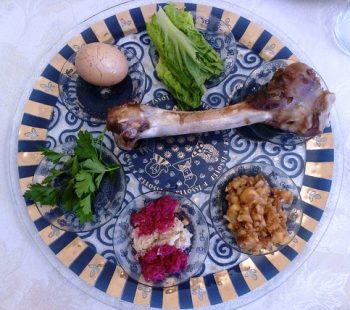 Seder Plate by Rebecca Siegel from Flickr.com is licensed under CC BY 2.0

The Passover sacrifice is a roasted lamb the Jews used to sacrifice at the old times. This ritual began when the Israelites were saved from the slavery in Egypt by God, the day before the exodus:

“Tell the whole community of Israel that on the tenth day of this month each man is to take a lamb for his family… Take care of them until the fourteenth day of the month, when all the members of the community of Israel must slaughter them at twilight. Then they are to take some of the blood and put it on the sides and tops of the doorframes of the houses where they eat the lambs… Eat it in haste; it is the Lord’s Passover. On that same night I will pass through Egypt and strike down every firstborn of both people and animals… The blood will be a sign for you on the houses where you are, and when I see the blood, I will pass over you.”           [Book of Exodus, chapter 12, verses 1-13]

The Passover sacrifice continued as annual offering as a reminder of the exodus, and to the covenant between Israel and God. An offering the Jews continued to offer until the destruction of the Temple. Today only the Samaritans still sacrifice it, while the Jews only commemorate it on the Seder plate. זְרוֹעַ is a roasted shank bone, of lamp or chicken, that symbolizes the roasted Passover sacrifice. It is merely a visual reminder, not to be eaten during the Seder.

זְרוֹעַ, literally means arm, is also a symbol to the power of God and to the way He librated us. A symbol to commemorate that God took the Israelites out of Egypt in a mighty arm, as it said in the Haggadah:

(=We were slaves in Egypt to Pharaoh, and God brought us out of there with strong hand and outstretched arm.) 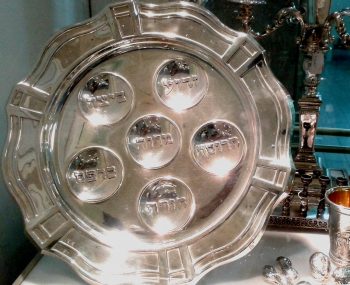 כַּרְפָּס is a green vegetable. Which green vegetable exactly the Jewish texts don’t determine, so basically any green vegetable will do. Usually, especially at the Sephardic Jews, you will see celery on קְעָרַת פֶּסַח. Some are very strict about it because if you look at the word כַּרְפָּס, and read it upwards you receive another word connected to Passover: ס פֶּרֶךְ. The letter ס in Gematria is 60, and the word פֶּרֶךְ means “travail”. Hence eating green vegetables is a reminder of the 600,000 Israelites enslaved in Egypt. The Ashkenazi Jews are less strict about it, and they usually eat potatoes as כַּרְפָּס. My family, for example, eats potato, and we quite like it, because the way we are required to eat it.

The כַּרְפָּס stands as a symbol not just due to its name, but mainly due to the way we are ordered to eat it. The כַּרְפָּס is the first thing to be eaten during the Seder. We dip it in salty water and then eat it. Why? Merely for this question. The Passover Seder is a special night, filled in with lots of small ceremonies, all for the purpose of commemorating the exodus. The core of this night embodies in its greatest commandment, as the Haggadah said:

וְהִגַּדְתָּ לְבִנְךָ בַּיּוֹם הַהוּא (=and you shall tell to your child on that day).

Every father is commend to pass the story of the exodus to his child. Dipping the כַּרְפָּס (potato or green vegetable) in salty water (that by them self symbolize the tears the Israelites shed in slavery) suppose to arouse curiosity among the children. The young generation of the family takes active part during the all evening, and the dinner is planned so the children will ask questions and be amazed by the unusual events. 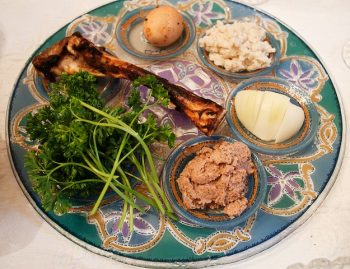 Passover Seder 5771 – The Seder Plate by Edsel Little from Flickr.com is licensed under CC BY-SA 2.0

מָרוֹר is a bitter vegetable, symbolizing the bitterness of slavery. As it said in the Haggadah:

The discussion of which vegetable should be included as מָרוֹר began more than 2,000 years ago. Some of the Jewish scholars declared that any bitter vegetable can be eaten as מָרוֹר during the Seder. Some minimized it to chicory and a few other local wild plants. Nowadays most of the Jews use lettuce as מָרוֹר, and some use horseradish (=a spicy root).

The מָרוֹר is the second thing to be eaten at the Seder. We should eat only a bite from the מָרוֹר, a tiny amount of it, dipped in the חֲרוֹסֶת. 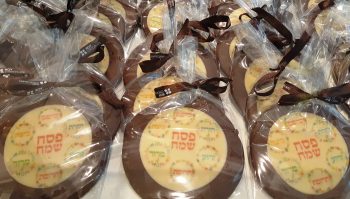 Cookies in the shape of Seder plate, March 2018 (photo by Ayana)

חֲרוֹסֶת represents the mortar the Israelites used, while working hard in Egypt, to build the bricks. It’s to be eaten during the Passover dinner merely as a spread to dip the מָרוֹר and the חֲזֶּרֶת in. But חֲרוֹסֶת is maybe the best part of the Seder plate. It’s sweet and delicious, and most Israelis enjoy eating it not only during Passover eve dinner. חֲרוֹסֶת is a mixed paste of fruits, nuts and wine. There isn’t a firm recipe everyone needs to follow, every family has its own way of making חֲרוֹסֶת. Some insert only dates, other use apples as well. Some insert only walnuts, other use almonds as well. Here are seven different recipes in Hebrew.

Nowadays חַזֶּרֶת is the Hebrew name of a very hot root – horseradish. But during the old times it was the Hebrew name of lettuce. This is way some families have the same מָרוֹר and חַזֶּרֶת: they basically have two lettuces on their Seder plate. Some have instead only the מָרוֹר, and when it’s time to eat the חַזֶּרֶת, they eat the מָרוֹר again, and called it second מָרוֹר. Most of the families eat a red spicy paste made of חַזֶּרֶת and beet (and hence the color red).

After the כַּרְפָּס and the מָרוֹר, it is time to eat the חַזֶּרֶת. We make a small sandwich out of matzo, and fill it with חַזֶּרֶת dipped in חֲרוֹסֶת.

A short simple recipe for חַזֶּרֶת:

A hard-boiled egg (בֵּיצָה) is a reminder to another offering: the Hagiga offering. When the temple still stood in Jerusalem, the Jews sacrificed the Hagiga sacrifice three times a year: during Sukkot holiday, Shavuot holiday and Passover holiday. With the temple gone, there are no sacrifices of this kind, only symbols. The egg in קְעָרַת פֶּסַח is to commemorate the destruction of the temple, because the oval shape of the egg is a symbol for the circle of life. Sitting in front of the Seder Plate now, we are celebrating our freedom, but still commemorating the loss of our temple. We are liberated indeed, but without temple to offer the ritual Hagiga sacrifice in.

The egg is to be eaten by itself during Passover Seder. Though we really like to dip it into the salty water, just like the כַּרְפָּס. The egg is the fifth and final symbol to be eaten from the Seder Plate (remember: we are not eating the זְרוֹעַ). The egg is actually the beginning of the whole dinner.

And in a nutshell  all the six ingredients of קְעָרַת פֶּסַח in this short video: